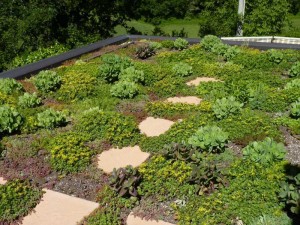 The green roof of apartment Priora at Casa Carotondo

Green roofs have been around for some time, but are now increasingly being regarded as a way to improve the environment in cities. The city of Chicago, for instance, has now declared that it sees green roofs as the way forward to try to reduce rising temperatures in the city as well as enhancing air quality. Heat is stored in the roof and walls of buildings during the day and given off at night, the so-called Urban Heat Island (UHI) effect. A green roof prevents this heat storage happening. Through the daily dew and evaporation cycle, plants on vertical and horizontal surfaces are able to cool cities during hot summer months. They also provide some insulation to the building below, even in winter. END_OF_DOCUMENT_TOKEN_TO_BE_REPLACED