We started cycling back to Chile on Boxing Day passing Bariloche then backtracking to Diana Haupe. Again once we had passed the residential build up we noticed the strong westerly wind coming straight off the lake Nahuel Huapi. 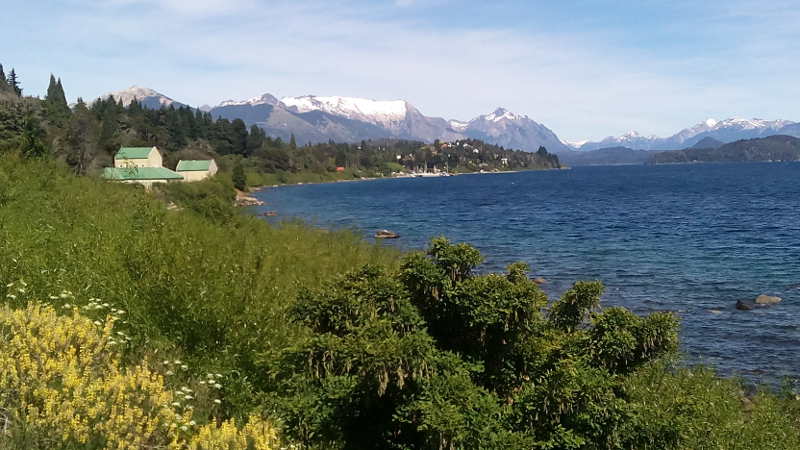 Eventually we had to turn into it to get back onto ruta 40, which would bring us to Villa La Angostura. To begin with the road wound its way through open grassland, which slowly developed into rolling hills but the hills did not provide the protection from the wind we had hoped for. Slowly we climbed up into a more forested area and at times got glimpses of the lake. We chose a beach area to have a break and bumped into an Indian cyclist we had met on the ruta 40 in the north of Argentina. We ate together and exchanged experiences before heading off (he was going to Bariloche). Looking for a campsite we eventually ended up camping on the beach, a lovely location and certainly preferable to the over-priced badly maintained campsite we had stopped at en route. 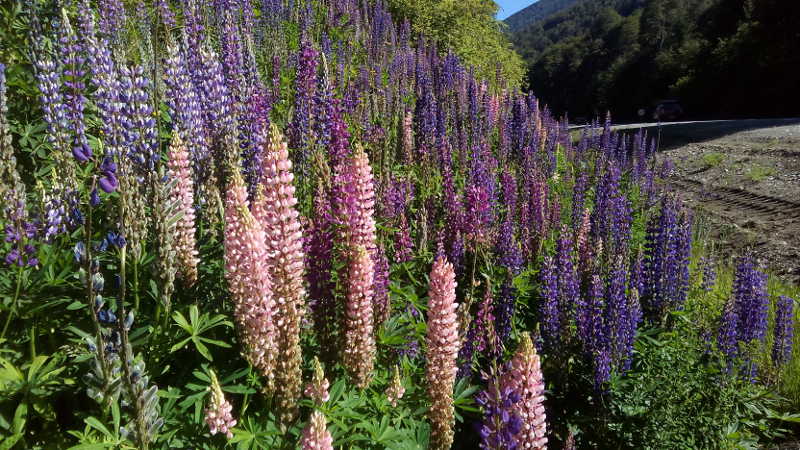 Lupins frequently decorated the roadside in the Argentinian Lakes 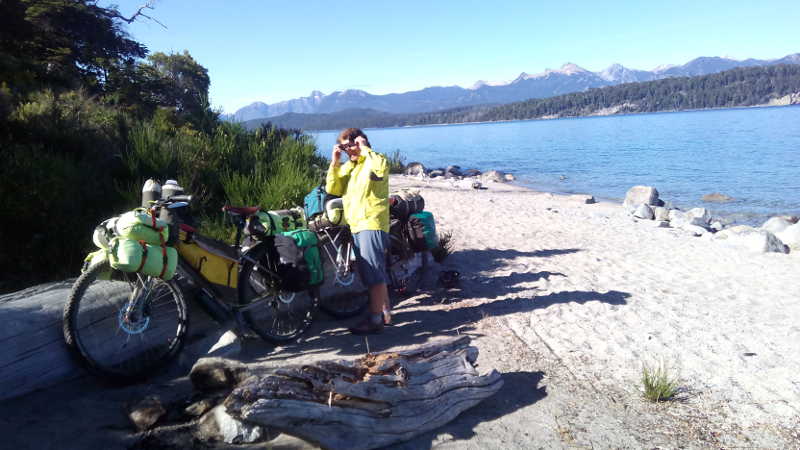 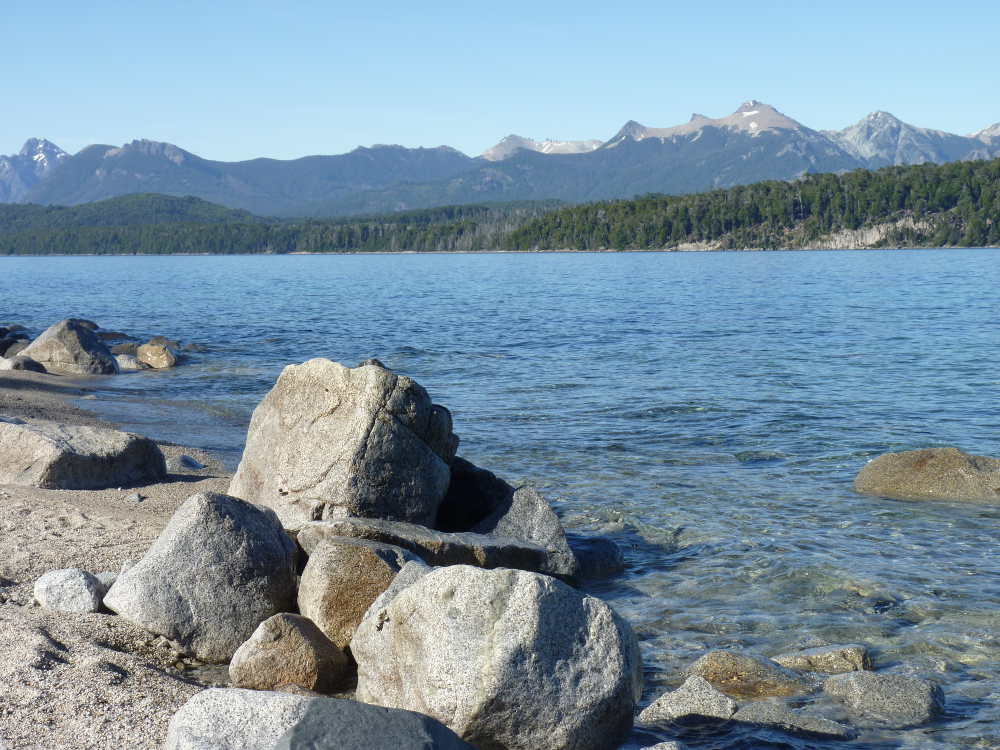 The view across Lago Nahuel Huapi

27.12.2015
Villa La Angostura was located about 26km from out campsite. It is a well maintained, wealthy and very touristy town with working free wi-fi! Everywhere you looked hostels, cabanas and the like were on offer. We went shopping and met a couple of young cyclists, who used their smart phone to confirm that the weather was going to be good for the next few days – it was a perfect sunny day. So we left, heading for the Argentinian border. The Argentinian and Chilean border controls on the Cardenal Antonio Samoré Pass are about 40 km apart. We aimed to go through the Argentinian border control, go over the pass and then camp a few kilometres further on in no-man’s land at a lake. I had originally protested that as bad weather on the Chilean side was expected it was bound to be raining on the pass. However the weather was perfect even I thought we would be alright. 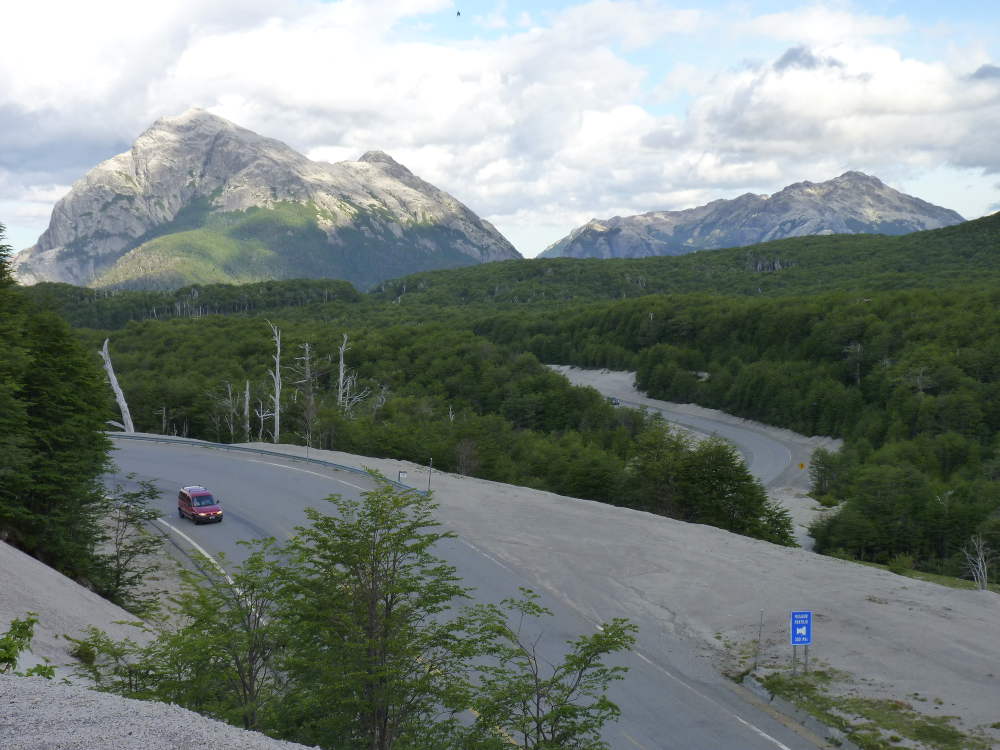 Leaving Argentina was a quick formality and we then wound our way up several slow climbs with a few descents in between. The terrain was mountainous and rocky with little waterfalls every so often. At one viewpoint a column of balsite, Cerro Pantojo, was just about visible. It had been created through volcanic action 1 million years ago. As we got higher the clouds accumulated into one dark grey mass so that it was impossible to photograph the column. The traffic wasn’t too heavy as it was Boxing Day and not so many people were travelling. At the immigration it had stated the border closed at 7pm. And slowly we did become the only ‘vehicles’ on the road.
The whole situation became quite eerie when we got to the top of the pass. It was dark because of the rain clouds, really quiet due to the lack of traffic and the forest had changed colour from green to brown. All the trees looked dead, we assumed, from the erruption of a volcano – possibly the Puyehue-Cordon de Caulle, which has been active in recent years. The ground was covered in a dark coloured sand that on close inspection looked like pumice stone. 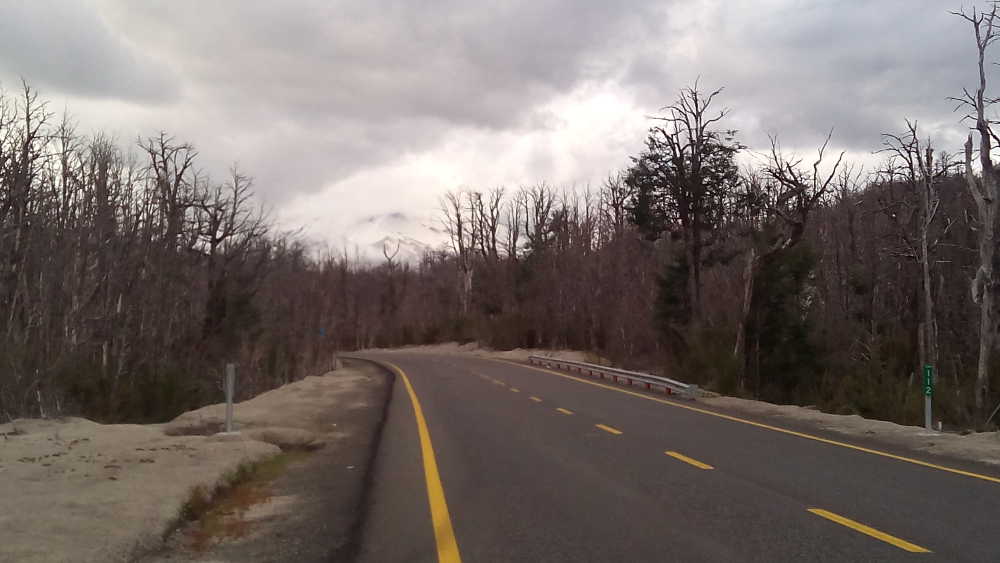 Dead trees on the Chilean side of the pass

The lake itself (name unknown) was lovely. It was quiet and after we settled down, the frogs and toads starting their croaking. A tranquil setting apart from the ghostly dead trees, that were actually re-growing at the base. As we went to bed the subject of pumas came up and how they might actually live in the woods. Rob recounted he had read someone else’s blog about how the blogger hadn’t slept while camping in the area, as he had previously been reading about puma attacks. Rob then promptly fell asleep and left me to contemplate the prospect of a puma attack. 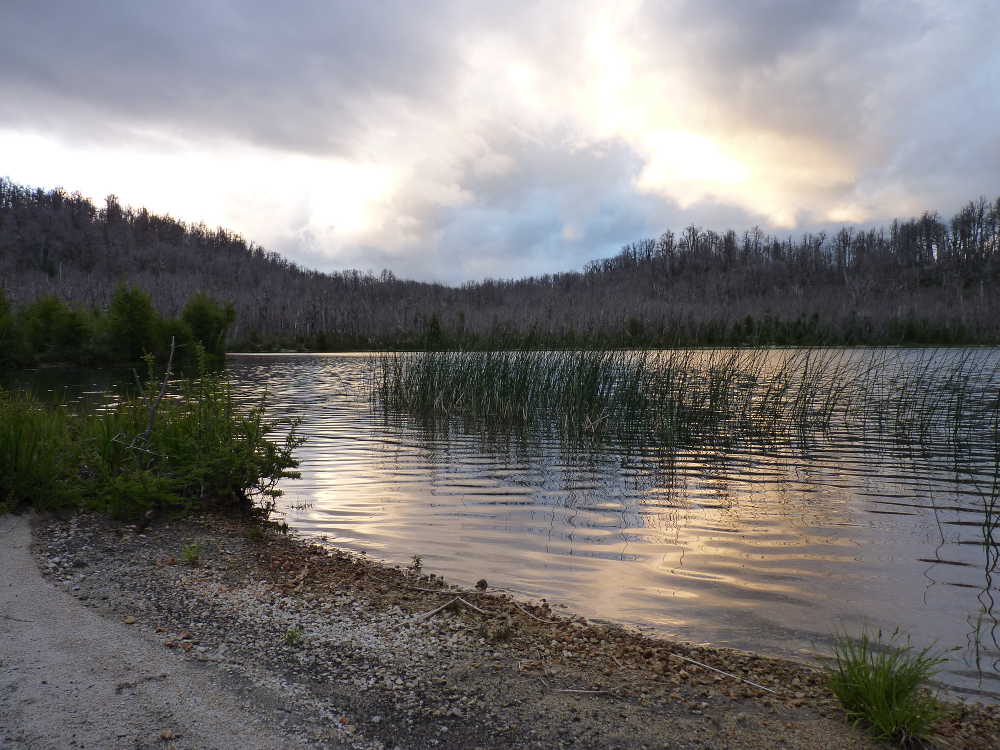 The lake in no-man’s land

28.12
The next morning we woke to the pitter patter of rain on the tent. I jumped out of my sleeping bag having remembered my shoes – I always leave them on the edge of the fly sheet. One was fine but the other was strategically positioned to catch the drips off the fly sheet. I emptied it of water and resigned myself to one wet foot that day. However the weather suggested it would be more likely be two wet feet. We had been lucky so far on this trip with the weather. This was the first time we had to take the tent down in the rain. We mostly free-wheeled to the Chilean border, where formalities were relatively quick and we were checked ahead of the cars, which meant we didn’t have to stand in line in what was now drizzle.

In order to protect the farming industry the Chileans don’t they do allow fresh fruit, vegetables or dairy products into the country. You have to eat it all before you arrive, which was why we had banana sandwiches for breakfast instead of the usual porridge – difficult to cook in the tent anyway. At the border the guard looked at our many bags and decided the dog was the quickest way of checking. The dog, happy to be out, did a few turns around the checking area before getting down to the serious business of sniffing our bags – probably an unpleasant experience anyway.

Once we were allowed into Chile we then faced the prospect of a longish ride with the aid only of some Christmas cake (panetone style in Argentina). There was a café at the border but the sandwiches it sold looked decidedly unappetising. There were no more shops until the town of Entre Lagos. I arrived somewhat drier as the weather was slowly clearing up but tired, hungry and irritable, fantasizing about egg and chips. We did a tour of honour around the town looking for a cheap eatery, but it was the wrong time of day (late afternoon). In the end it was empanadas from the supermarket. We then found a campsite. In this town they all seem to be in the back gardens (large) of houses backing onto the lake. It was however reasonably priced and contained all those things a happy camper needs like a hot shower and even wi-fi. 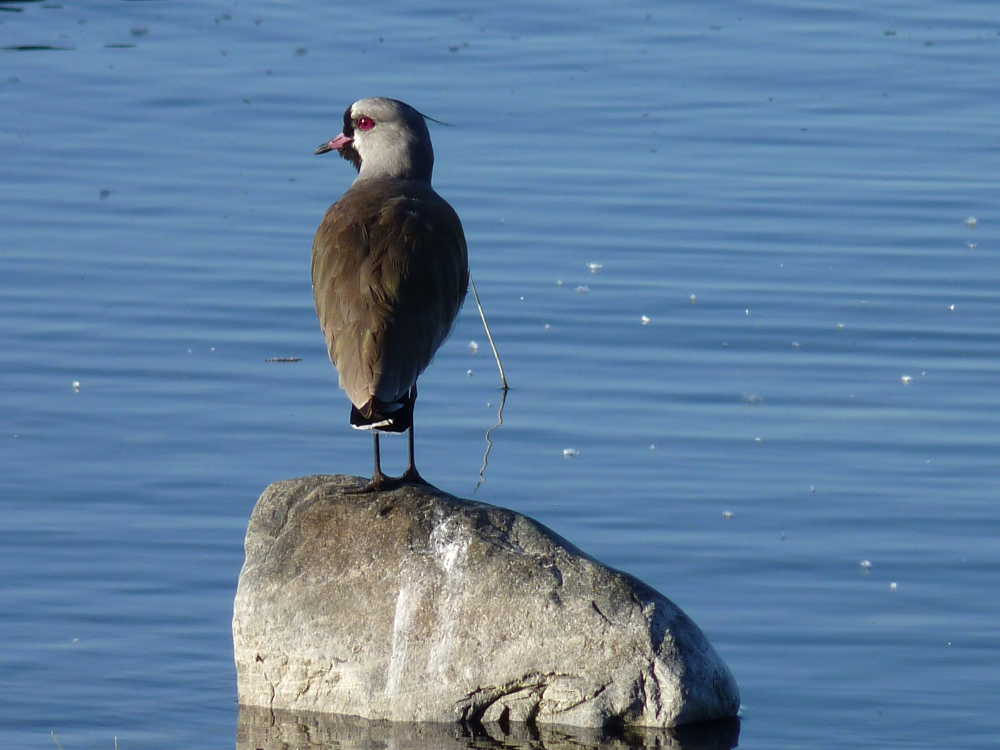 A bird on Puyehue Lake 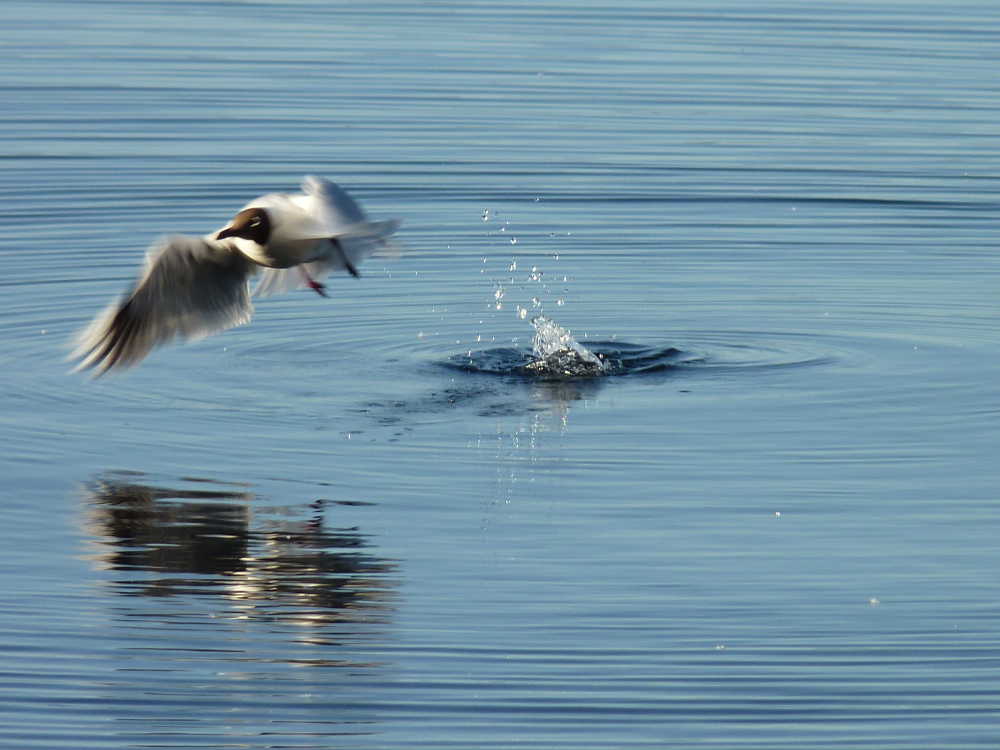 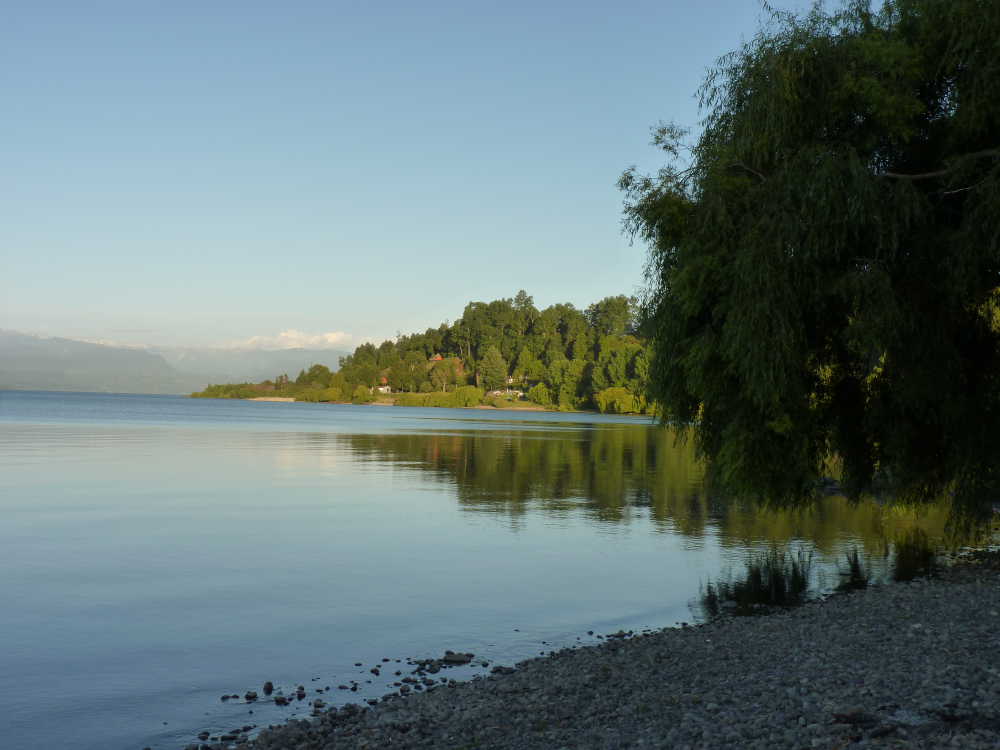 Lago Puyehue – the view from the campsite at Entre Lagos

We spent the next day sorting out a few things such as internet access via the mobile network for the PC. We were going to be heading down the Carretera Austral into increasingly isolated areas just as (hopefully) the booking season was starting for the apartments and needed regular access to at least emails.