30.12
From Entre Lagos we headed south to Lago Llanquihue. This lake is so enormous that it is difficult to see the other side in some areas. It is home to large tourist centers such as Frutillar and Puerto Varas but we decided to give these a miss and take the quieter (hopefully) road on the other side to a small town called Las Cascadas. It was small but had a couple of supermarkets to stock up on food. We then backtracked to a public beach area just outside of town where we spent the night. There we had lovely views of the lake and Vulcano Calbuco. 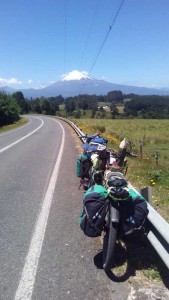 South to Lago Llanquihue, Vulcano Osorno in the background.

Up until this day we had been very lucky with our encounters with man-eating insects – or any other types for that matter – apart from a few mosquitoes and midges. It was on this day we came across the unpleasant side of nature – some large black and horribly persistent horseflies called tabano negro or colihuacho (the scientific name is scaptia lata). At first Rob said I was getting hysterical – these type of bugs usually show more interest in me than him – however after some cycling he agreed that even though we were cruising along at around 20 kmph (flat tarmac) they were at least managing to keep up, if not land on us. Stopping for any length of time was not an option as they did land and bite, which took a lot of pleasure out of cycling and enjoying the scenery. They seemed to be most interested in us as moving colourful objects – they even landed on the bikes and bags – but if we sat still in the shade they would eventually go away. Best of all was the ever faithful bus shelter – the flies didn’t follow us in – or if they did were vulnerable to attack. I also used a small branch for whacking them especially on ripio hills, when we were down to 4-5 kmph. 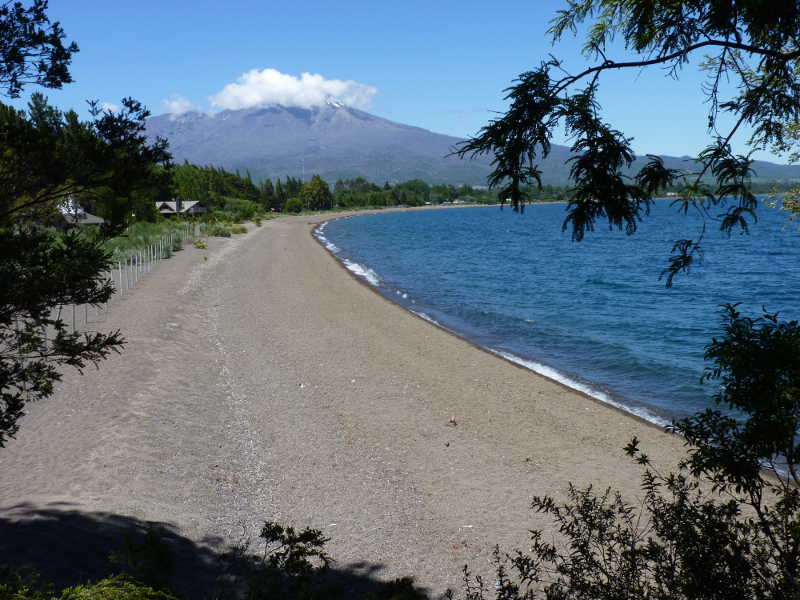 The beach at Ensenada

31.12
From Las Cascades we cycled on to the town of Ensenada for a brief stop. We sneered at the entrance to the town as there was a large decorative wooden arch welcoming you, but then there was very little in the town. We found out subsequently that it had suffered quite badly from an erruption of volcano Colbuco in April 2015. Many people lost their homes as roofs were damaged by the large amount of ash that settled on them as well loosing livestock. We carried on to the larger town of Ralun following at times the Rio Petrohue. The roadside was mostly forested with a momentary view of tiny Lago Patas. We tried to eat lunch by the riverside but it was a miserable affair with our new found fly friends keeping us company.

New Year’s Eve was spent in Ralun on another campsite. We were both quite tired so just shared a half roasted chicken and a few beers and then went to bed early. We saw in the European New Year but slept through the Chilean one. Ralun was actually on an estuary – Reloncavi – rather than a lake but it was in a beautiful location surrounded by densely forested hills.

01.01.2016
Happy New Year!! It was a difficult start. We cycled along the estuary all day and the views when we got them were wonderful, however the road was dreadful ripio all the way. This along with the Chilean roller coaster hills would have made for a difficult day but our faithful horse fly friends were still with us and this really made life hard. Stopping was stressful but not stopping was not an option. Along much of the route there was little habitation so bus stops were few and far between. We passed through the small town of Cochame and then continued to a campsite just outside – a dot on the map called Llaguepe. Again the campsite – described on the board as ‘places to camp’ – was in someone’s back garden. He and his family were living in a new house and the old one had been turned into an office. We were told we could use the bathrooms in the old house.

The owner was having a barbecue to which he invited us but we pleaded tiredness as trying to make conversation with a group of Chilenos for a whole evening when you don’t speak Spanish is difficult and I was tired after all the ripio and flies. (Yes, as intrepid travellers we should have accepted the invitation but I was really tired). As everyone seemed to be using the toilets in the old house as well as us we decided he must have plumbing problems in the new one. The owner was a fish farmer (salmon) and if we understood correctly was also a chef. Obviously you need several income streams in this area to survive comfortably. And yes, the horseflies were around all summer he said as he squashed one that had just settled on his arm.

02.01
The next day started off dull and cloudy and eventually descended into drizzle and finally proper rain. The advantage of this was that the horseflies decided to take the day off and we could finish the ripio at our own pace. At the tiny hamlet of Puelche, which has a ferry we picked up the asphalt again. In this case it was the famous ruta 7 – the Carretera Austral – which takes you down to the southern most regions of Chile. It was built by the army during Pinochet’s time to give the army access and presumably, therefore, control of these areas. The road now has cult status for travellers of all types. It is slowly being asphalted but large sections are still gravel, steep and hard work for the cyclist. We cycled along it for a few more kilometres to the town of Contao.

I had announced that considering the weather and our rather damp state we could afford at least one night under a proper roof. I asked at one establishment but it was above our agreed price and the woman seemed somewhat relieved when I said ‘no thanks’ – wet bedraggled cyclists obviously didn’t feature among her chosen clientele. We cycled back the way we had come to try out a hospedaje – privately owned accommodation. The woman advertising was full but her mother had a spare room. It turned out to be dark and uninviting I left hurriedly. Opposite was a sign advertising spaces to camp. This turned out to be a field where the grass had just been cut. We asked about the ablutions and were told they hadn’t quite got around to building any for the camping but we would be able to use the ones in the house but couldn’t see them just yet as they needed cleaning. We left.

The next campsite had ablutions and it had what the owner called a ‘refugio’. This was a yurt like construct from wood and heavy duty plastic that could be used by the campers for cooking and just ‘hanging out’ during the notorious bad weather in the area. It meant you didn’t have to sit hunched in your tent all evening. You were also relatively bug free (mosquitoes in this case). We did have the company of a young cat, who spent the rest of the day following us around. We also negotiated the use of a hot water shower, much needed after our earlier cold one! 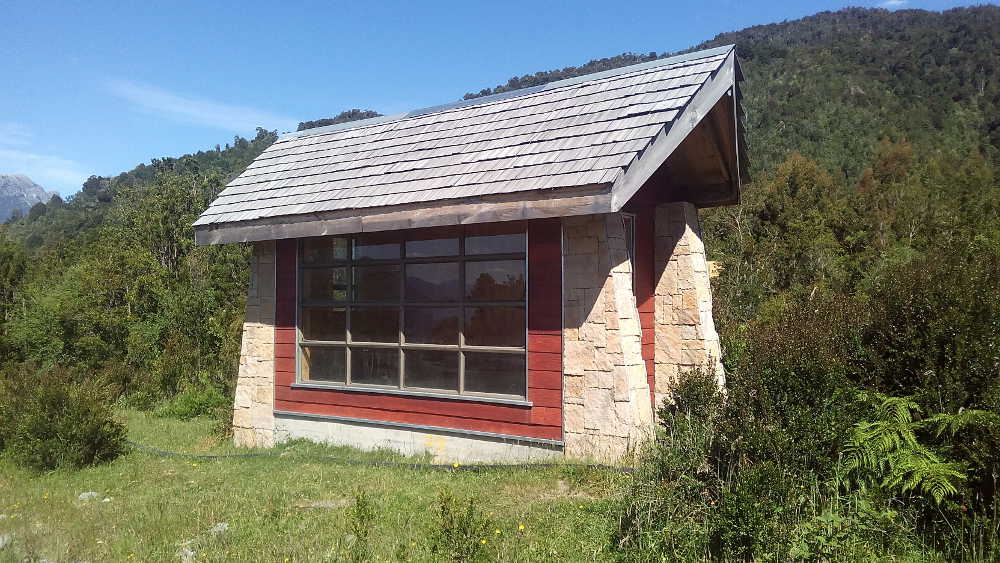 The ultimate Bus Shelter with just a small side entrance.