January 2nd. started off dull and cloudy and eventually descended into drizzle and finally proper rain. The advantage of this was that the horseflies decided to take the day off and we could finish the ripio at our own pace. At the tiny hamlet of Puelche, which has a ferry we picked up the asphalt again. In this case it was the famous ruta 7 – the Carretera Austral – which takes you down to the southern most regions of Chile. It was built by the army during Pinochet’s time to give the army access and presumably, therefore, control of these areas. The road now has cult status for travellers of all types. It is slowly being asphalted but large sections are still gravel, steep and hard work for the cyclist. We cycled along it for a few more kilometres to the town of Contao. 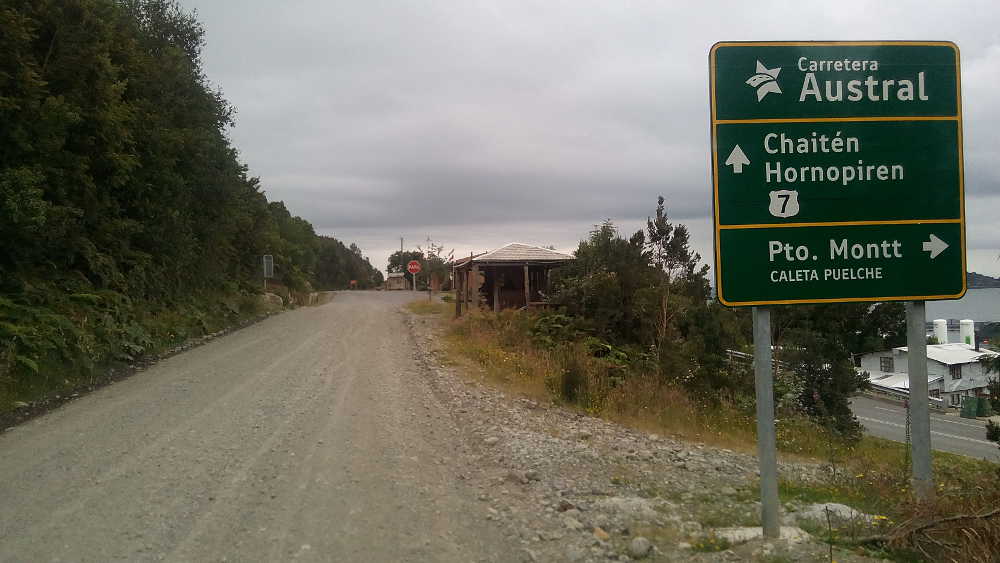 The start of the Carretera Austral

I had announced that considering the weather and our rather damp state we could afford at least one night under a proper roof. I asked at one establishment but it was above our agreed price and the woman seemed somewhat relieved when I said ‘no thanks’ – wet bedraggled cyclists obviously didn’t feature among her chosen clientele. We cycled back the way we had come to try out a hospedaje – privately owned accommodation. The woman advertising was full but her mother had a spare room. It turned out to be dark and uninviting I left hurriedly. Opposite was a sign advertising spaces to camp. This turned out to be a field where the grass had just been cut. We asked about the ablutions and were told they hadn’t quite got around to building any for the camping but we would be able to use the ones in the house but couldn’t see them just yet as they needed cleaning. We left.

The next campsite had ablutions and it had what the owner called a ‘refugio’. This was a yurt like construct from wood and heavy duty plastic that could be used by the campers for cooking and just ‘hanging out’ during the notorious bad weather in the area. It meant you didn’t have to sit hunched in your tent all evening. You were also relatively bug free (mosquitoes in this case). We did have the company of a young cat, who spent the rest of the day following us around. We also negotiated the use of a hot water shower, much needed after our earlier cold one! 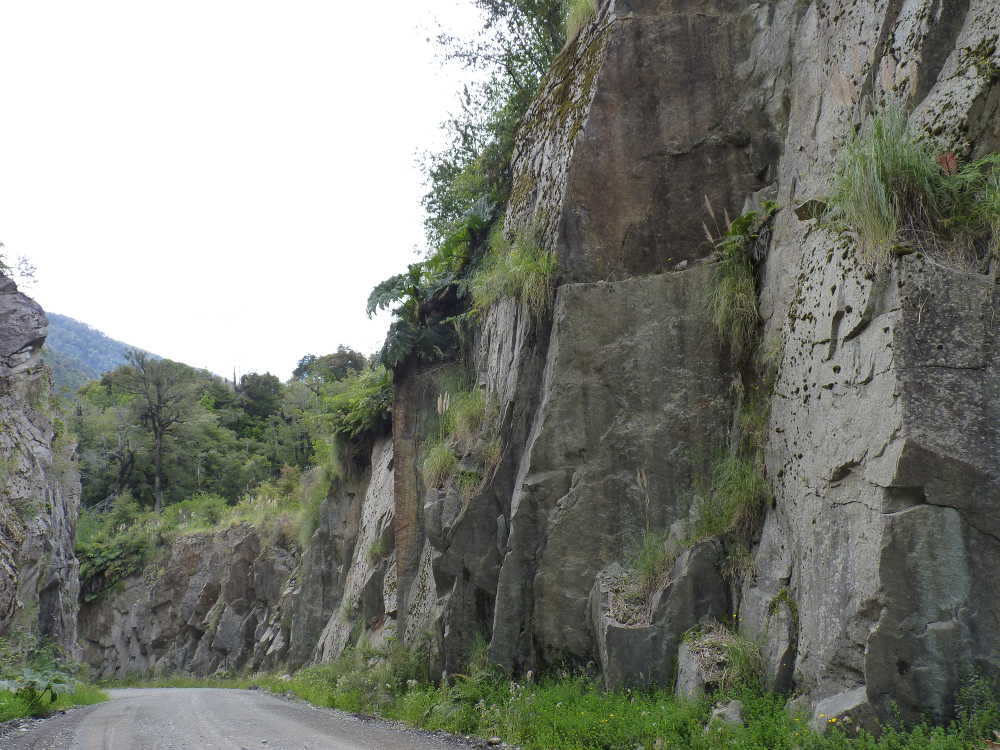 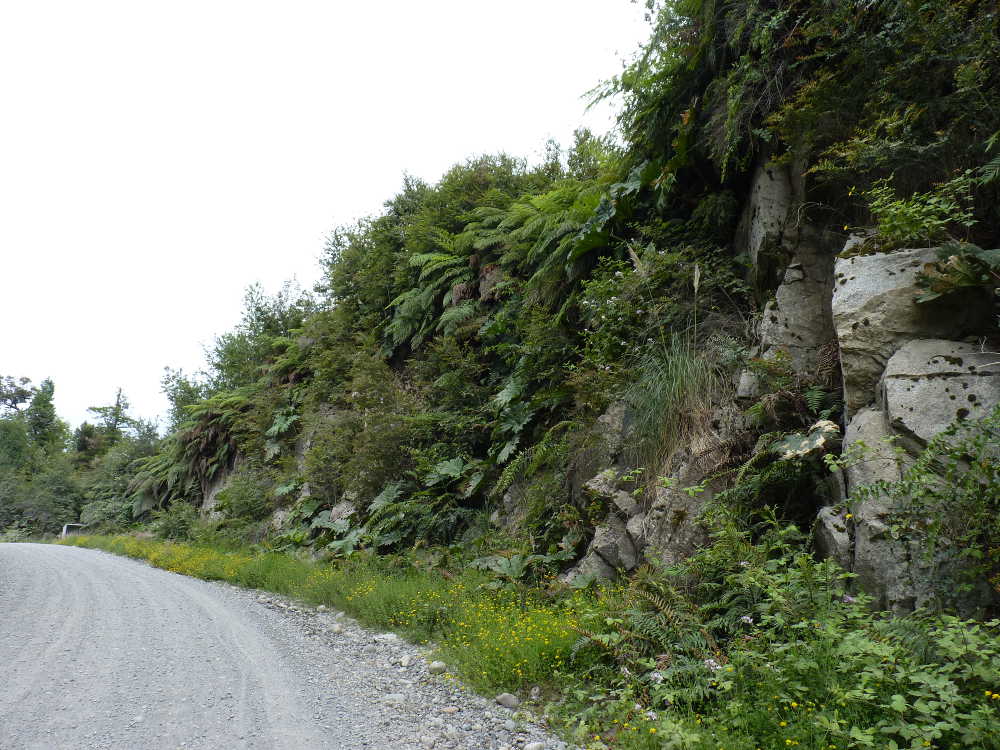 Dense vegetation along the roadside

03.01
From Contao we cycled just over 50 km to the town of Hornopiren. The road was partially paved but it seemed to me the steepest bits were on gravel. It was the usual rollercoaster mostly through forested hills. At Hornopiren we did a tour of honour around town and cycled back out of town to the campsite, where we met Silke a lone German cyclist, who had come up from the south. There ensued a useful exchange of information on both sides about what the other could expect. We had decided to stay a day here with a view to considering whether to carry on. Vanessa had a serious family illness to consider and Rob’s hay fever – specifically the way it was affecting his eyes wasn’t getting any better. We mentioned it to the campsite owner. She suggested using maqui berry. This is used by the local Indians, the Mapuche. The Mapuche were never conquered by the Spanish colonists and the strength and stamina of the Indian warriors has been attributed to their use of the maqui plant. Unfortunately it wasn’t possible to buy maqui in any form in Hornopiren despite the large indian community there. After spending a day using the local free wi-fi on the quayside to the ferry working our options we decided to go on to the next town, Chatain, as there was a ferry from there to Puerto Montt, should a retreat be necessary. 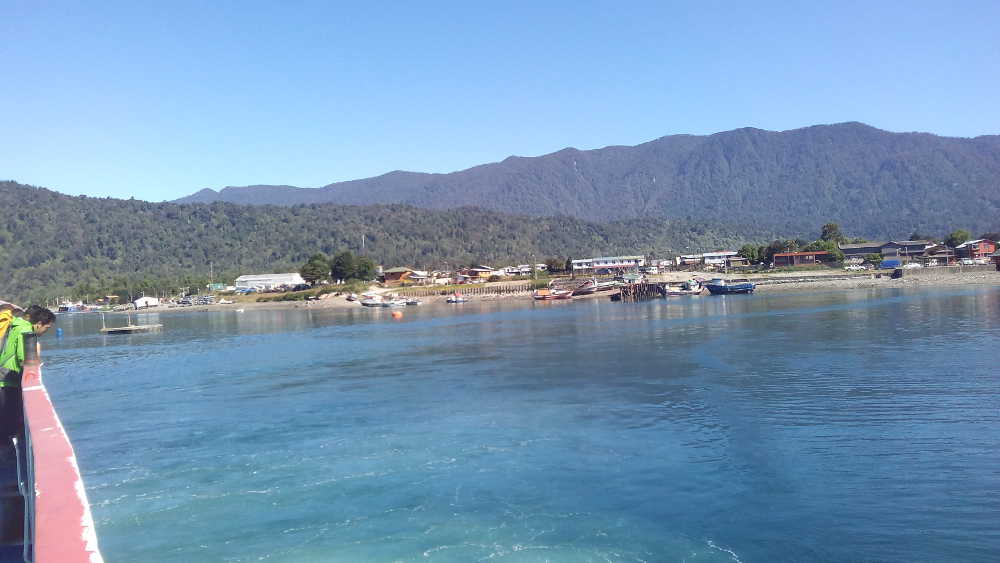 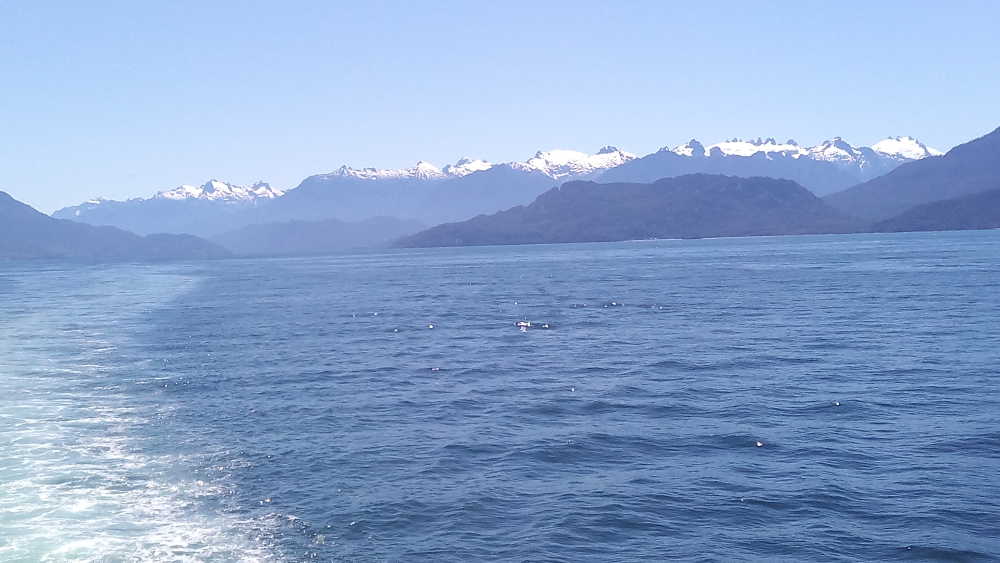 05.01
We had to take the ferry from Hornopiren to Caleta Gonzalo as there is no road. The area between the two places is covered by steep mountains densely forested and broken up only by rivers. The ferry left at 10am and it was only with some considerable panic that we managed to get it on time. Our getting up and packing skills were slacking exacerbated by cooking gas (to make the breakfast) that was cold and took ages to heat the water. The weather during the day was hot and sunny for the most part but the mornings were always cold and dewy, hence the cold gas.
Once we had boarded, the ferry was a relaxing way to spend 5 hours and made a change from cycling. 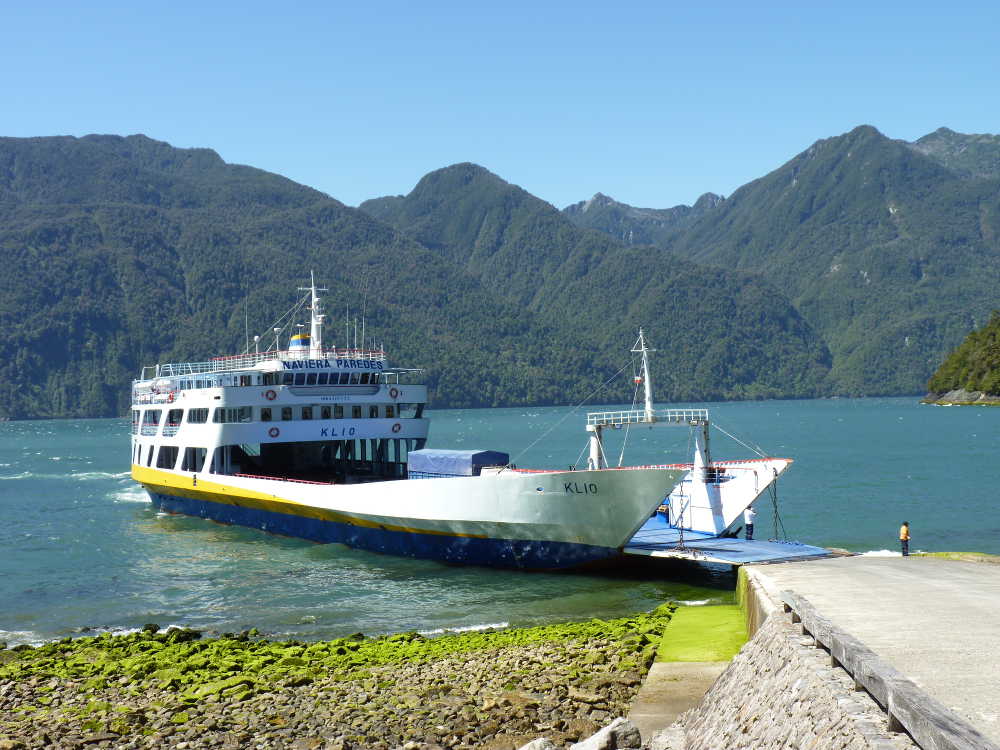 The ferry at Caleta Gonzalo 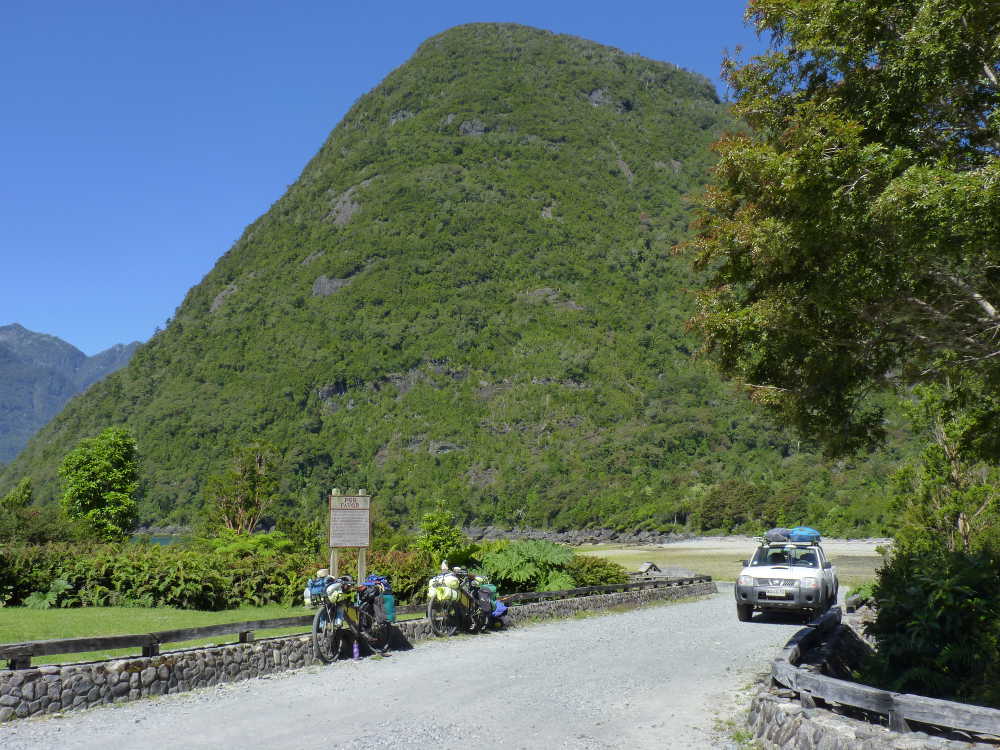 Caleta Gonzalo is basically a point for the ferry to off-load. It is in the privatly owned park Pumalin Sur and at Caleta Gonzalo there is only a park information office and a campsite. We had lunch, then made our way to the next campsite about 14 km further on. Wild camping is illegal in the park but a number of campsites have been set up along the one road to Chaiten. We were extremely impressed. Our spot had a covered area with table and chairs and its own bin. All of which was very well constructed. There was a level green patch to put the tent on. The ablutions were minimalist but in working order. The only two things missing to make it the perfect site were hot water and wi-fi.

The campsite in Pumalin park

Campsites along the Carretera tend to be in the back garden of a local resident. The buildings put together to house the ablutions or provide weather protection are often of the bodgiest possible DIY, that you know will not last very long. The plumbing is often leaking or mal-functioning and the ground lumpy. It is evident the people themselves have never been camping. Camping in someone’s back garden also means you are usually in a residential area with all the associated noise at night; especially stray dogs fighting over territory or just barking continuously. It was therefore pleasant to be able to sleep in the quiet forest. There were other people camping there but the noise didn’t seem to travel far and the cold night time temperatures and lack of electricity for lighting sent everyone to bed early. 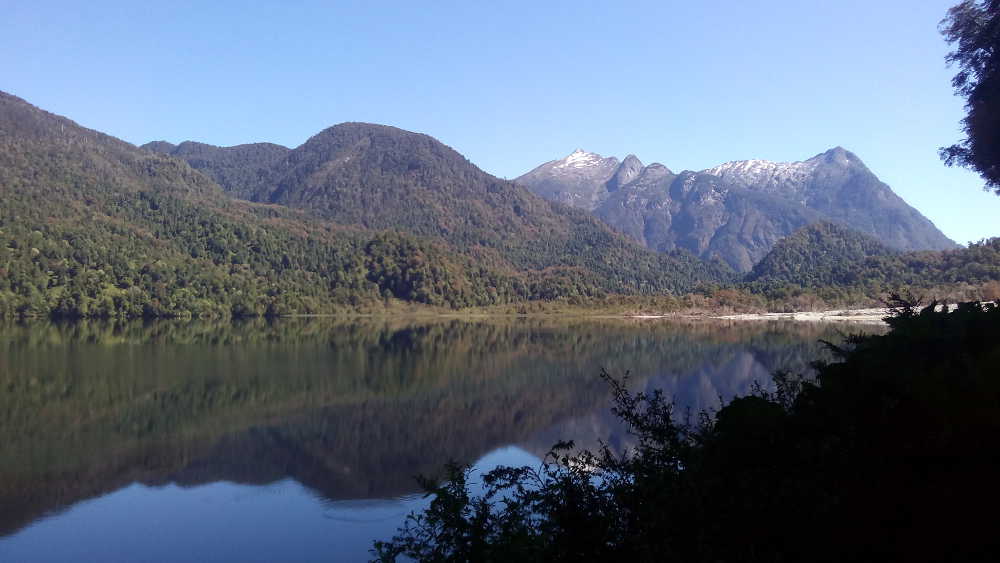 Scenery on the way to Chaiten

The road through the Pumalin Park

The next morning the sky started off clear and then slowly a mist built up coming from the river and waterfall close by. As soon as the sun emerged from behind the steep hills it disappeared but all the vegetation was wet as if it had rained. The 44km into Chatain were pleasant and not too steep. We passed some ancient larch forests and volcano Michimahuida. Rob became a speck on the horizon, which I took to mean he was feeling better having had a day and a half off. Previously I had, particularly on asphalt, been keeping up with him, which is generally unheard of. I started to feel quite optimistic about the rest of the trip. We got into Chatain quite quickly largely thanks to the horseflies, which had reappeared and made stopping difficult. We found another back garden campsite, had some tea and then Rob went on mission to buy a few things. When he came back he was not a happy person. His eyes were really giving him problems. Apparently pollen is worst in the early morning and the evening. There must have been some particularly heavy duty allergens in the air that evening – possibly grass. The town was surrounded by and also contained a lot of grass, most of which hadn’t been cut. The next day we reluctantly got the ferry to Puerto Montt. 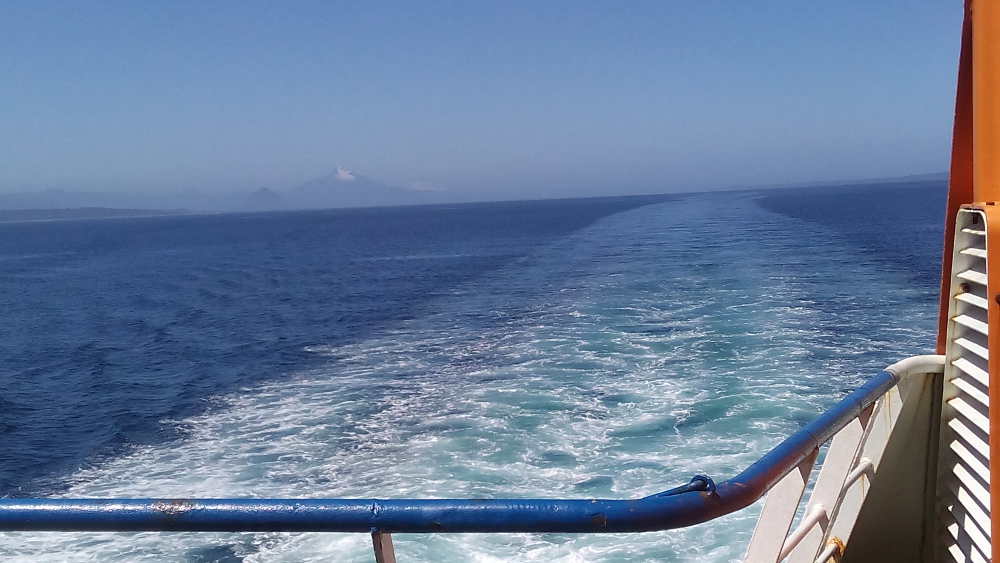 We stayed in Puerto Montt for a few days, then decamped to Puerto Varas on Lago Llanquihue hoping for a more relaxing environment and campsite. It was while we were here contemplating our options that Vanessa received word that her father had died. Our cycle tour was over and we started the long journey back to the UK via Santiago, the USA and Le Marche.

Although the trip started and ended badly we both enjoyed it immensely. It was a change from our daily routine in Italy and a part of the world neither of us had visited before for any length of time. The only regret was our lack of language skills. This meant that we couldn’t benefit from the friendliness and enthusiasm of the people we met and learn more about their countries. We intend to return sometime to finish the trip down to Ushuaia – more research will be needed however as to the best time to go with regard to hay fever.