As the forecast predicted the weather was fine and the wind had died down. We left San Martin de los Andes using our old friend the Ruta 40 starting at km 2212 (the number of kilometres to its end in Uschuia). 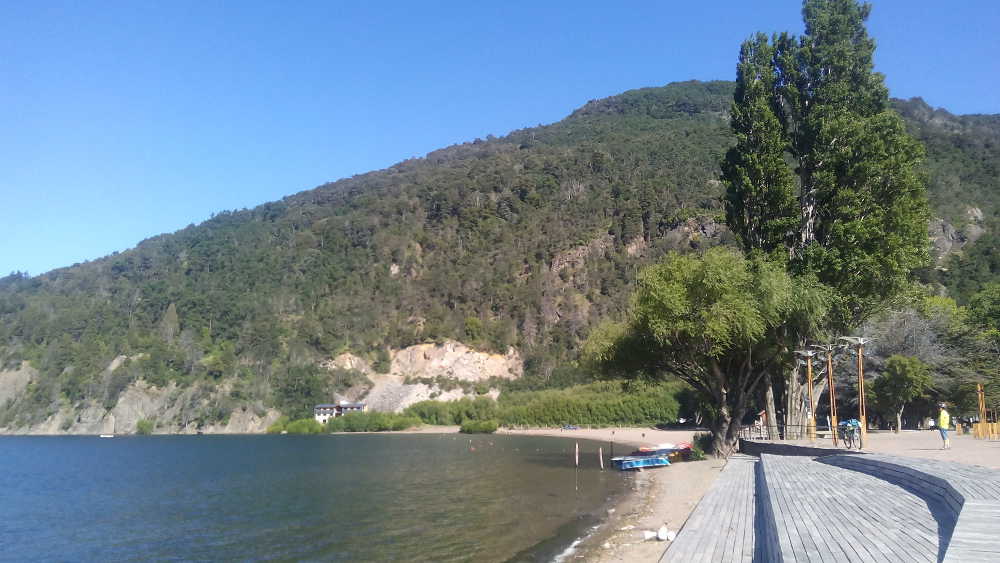 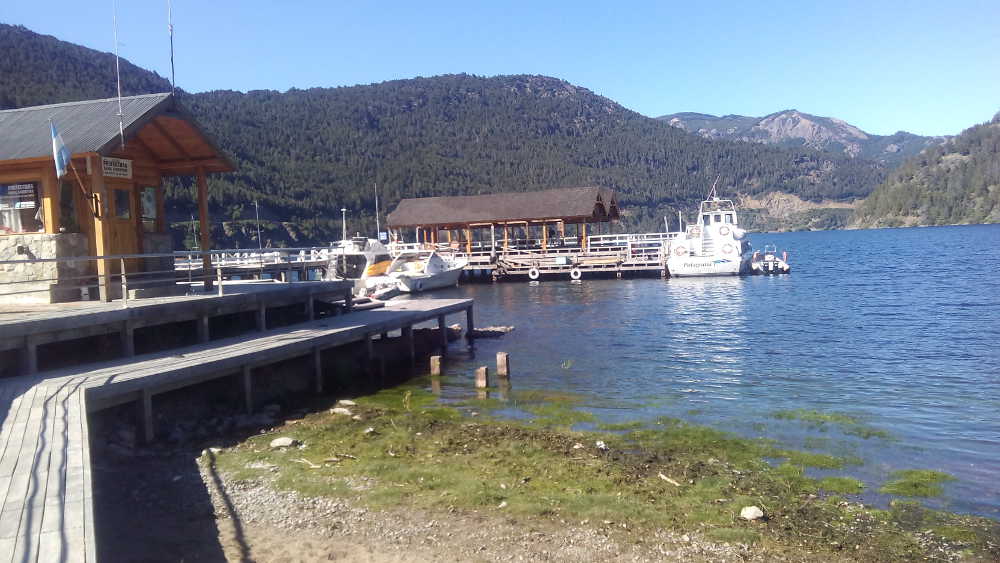 As we left town the road climbed out of San Martin along the lake giving us fine views as we looked back. There were also several viewing points as we cycled along. Eventually the road turned off inland and headed south. The route was very picturesque being mostly woodland with, at one point, a waterfall. 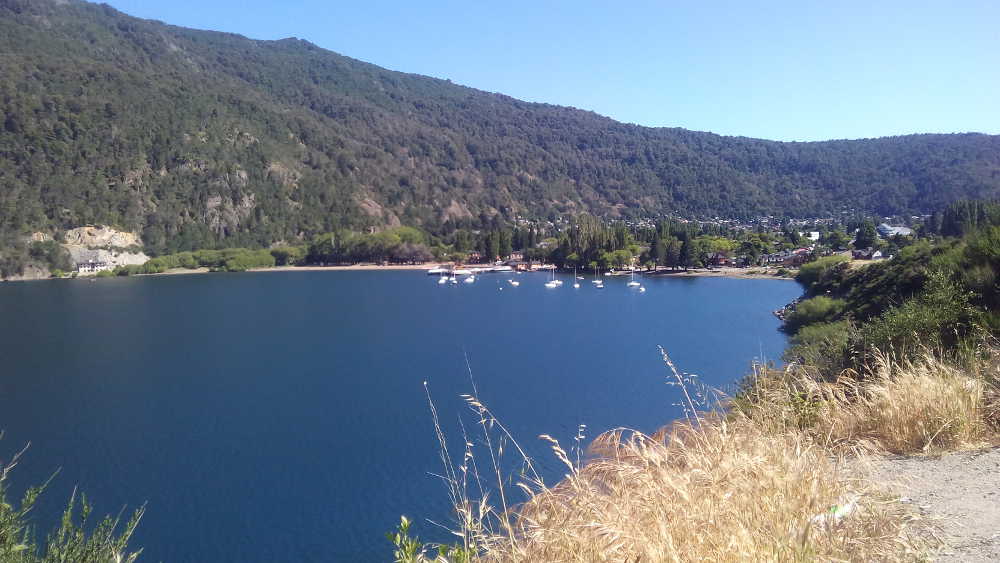 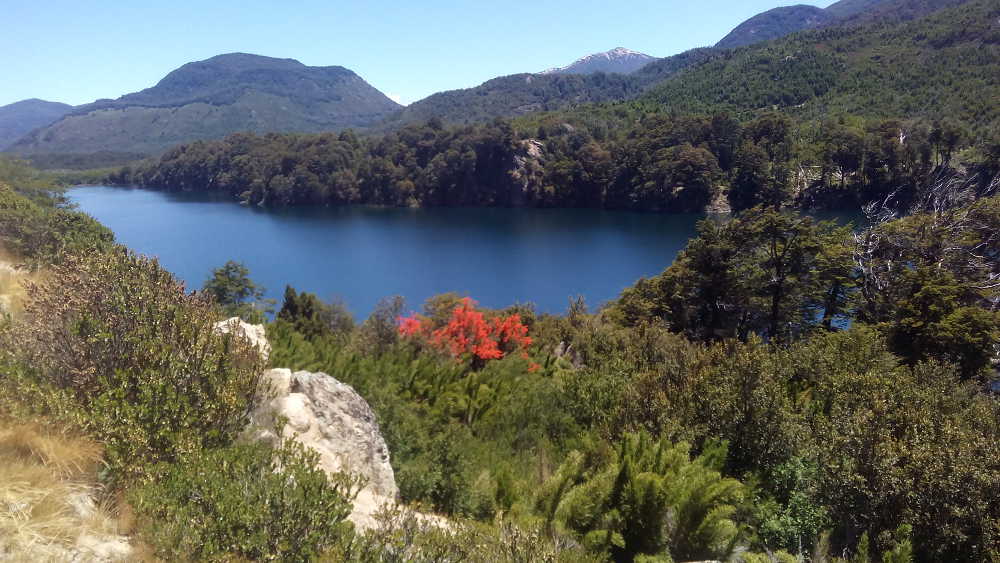 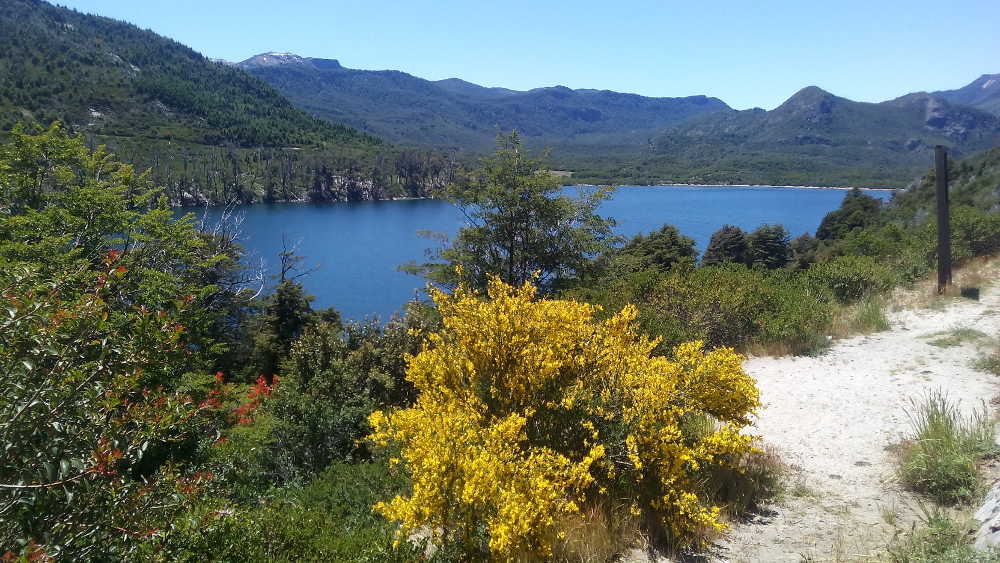 After about 40km we reached Lago Faulkner, which looked lovely and had a campsite. There ensued a discussion about whether it was too early in the day to stop and weren’t we here to enjoy the countryside as well as cycle. The matter was decided when I asked what they were charging. It turned out to be the same price as a fully serviced campsite in Bariloche. End of discussion we got on our bikes and left. Just down the road was another lake Villarino, which we went to look at. There we noticed, instead of the usual ‘camping forbidden’ sign, there was a sign actually allowing free camping. Even Rob had to agree it was too good an opportunity to pass up. We found ourselves a quiet spot away from the other campers beside the lake and settled in for the evening. Rob took the opportunity of the early finish to wash some clothes and we both had a rather speedy cold bath in the lake – as opposed to the hot showers offered by the other campsite. 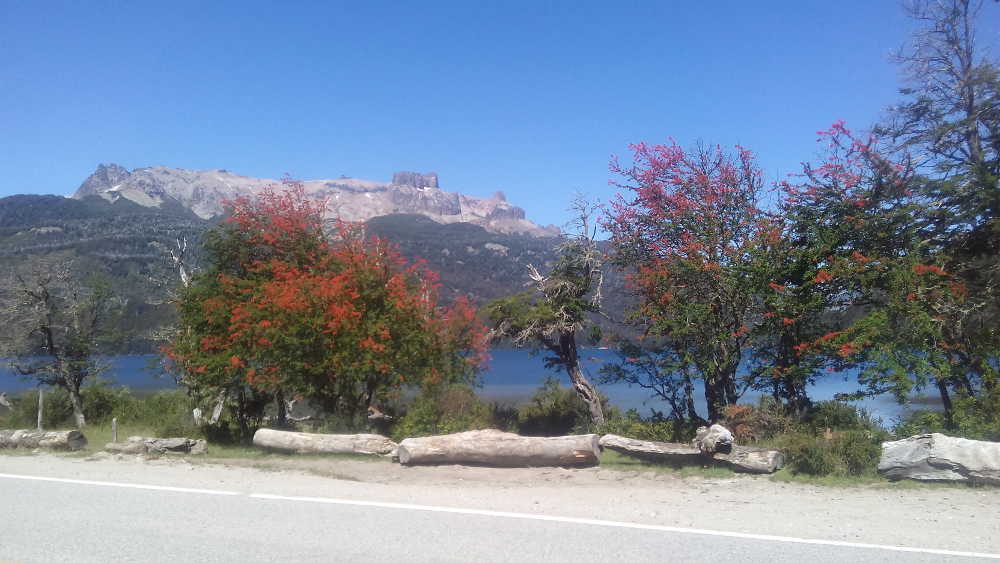 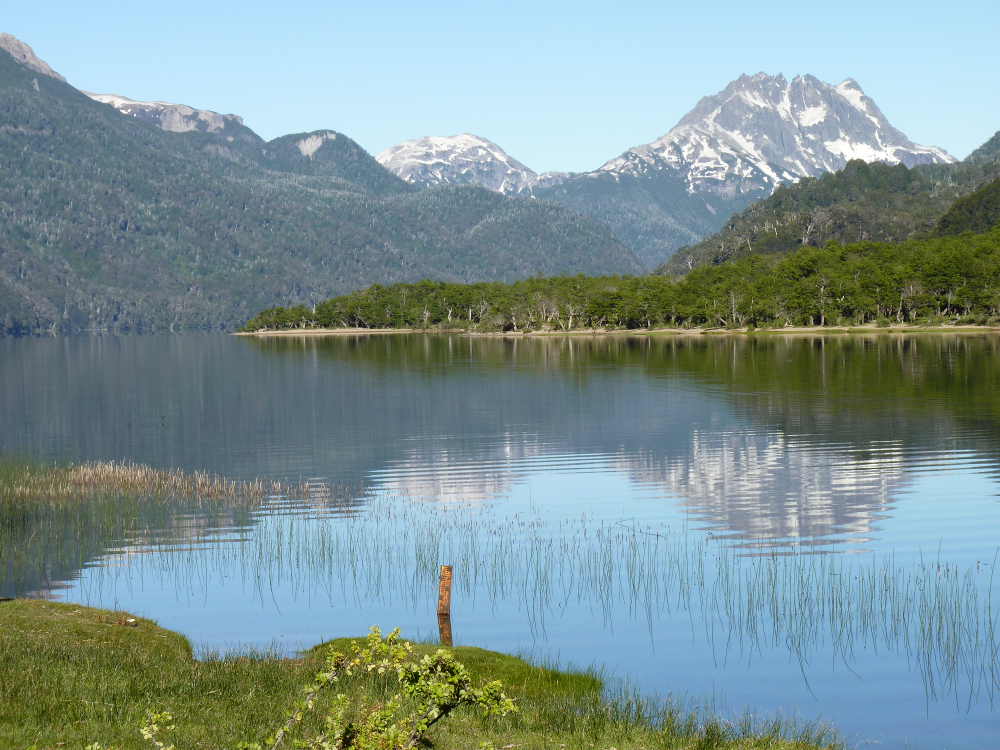 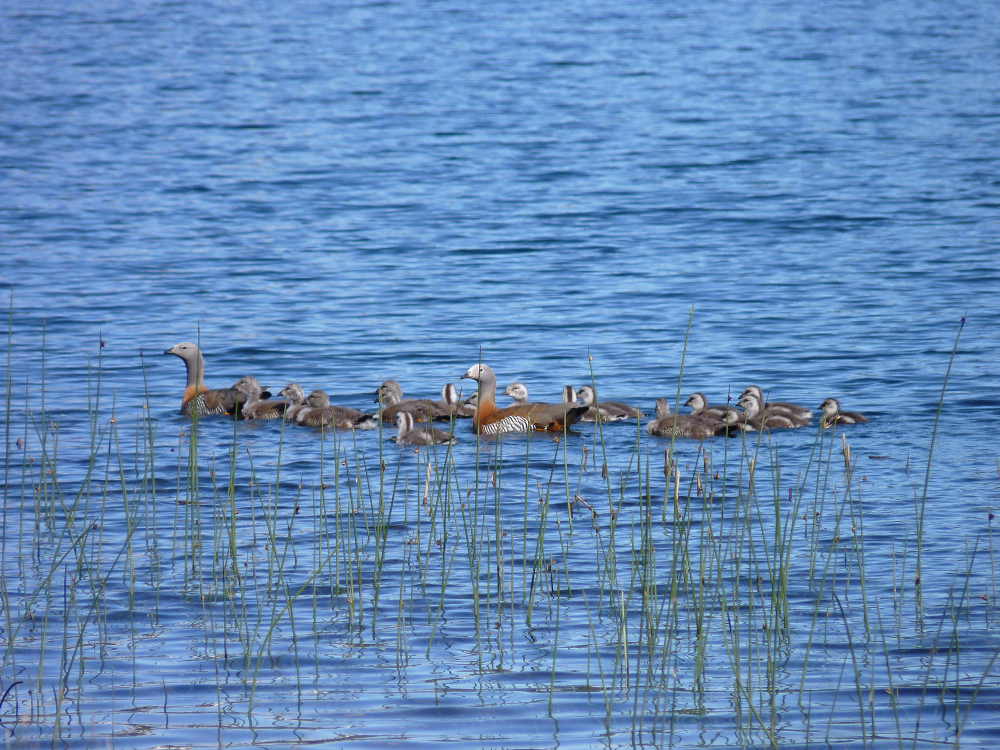 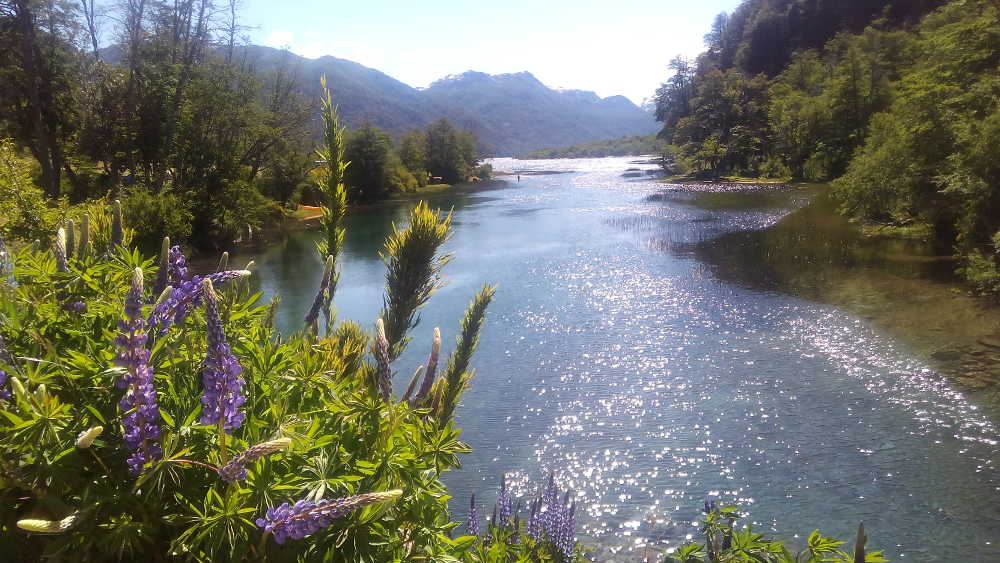 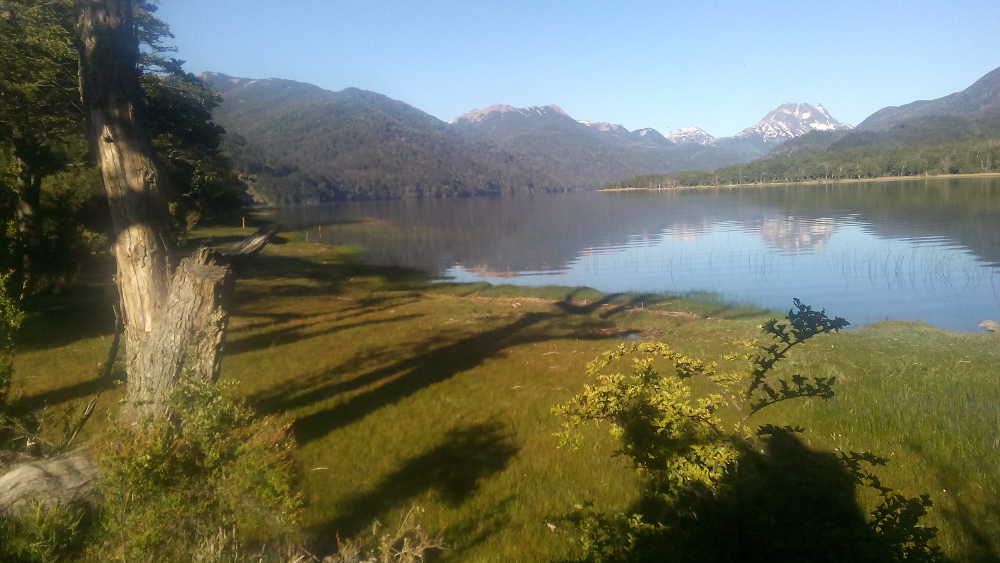 It was the perfect setting, although I have since read that as it is the only legal free campsite in the area it tends to get very busy and very dirty during the peak holiday season. As it was we were rather rudely awoken at about 5am by the arrival of a van. A couple got out and started talking loudly, she was also singing and their dog barking. It was early Saturday morning and the start of the Christmas holiday period so they had probably spent the night driving there. I shouted at them in an irate manner in Spanglish and the volume decreased somewhat. 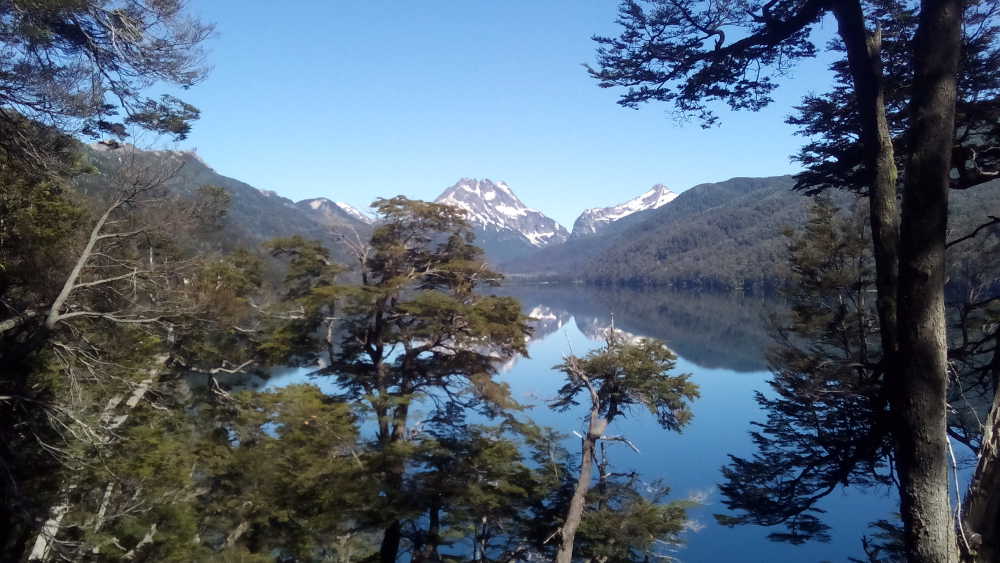 The next morning our route continued along ruta 40, which thankfully had been newly asphalted (the map still showed a gravel road). The road was steep at times climbing through a sort of canyon at one point, passing a fast flowing river and lots of forest. We eventually got to the junction for Lago Traful. This is where the Chilean style ripio started. We ended up pushing. The road went through forest that must have been there for years as the trees were enormous. 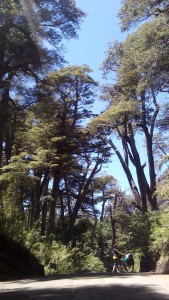 On the way to Lago Trufal, Argentina

Eventually we dropped down to the lake. The road roller-coasted along the side of the lake. Where there was access there were also ‘camping forbidden’ signs. Eventually we got to Villa Traful – the only small town for miles. The town extended for some way along the road but didn’t seem to have much hinterland. In the middle was an over-priced campsite, so we just stocked up with food and carried on. About 5km out of town we came across another campsite more sensibly priced and with lovely views so decided to settle there for the night. It was getting late and the camping options along the road were decidedly limited. We later found out that there is a number of cyprus trees submerged in the lake after a land slippage probably in the 1960s. Because the lake water is so clear the roots of the trees are visible when the surface is calm. 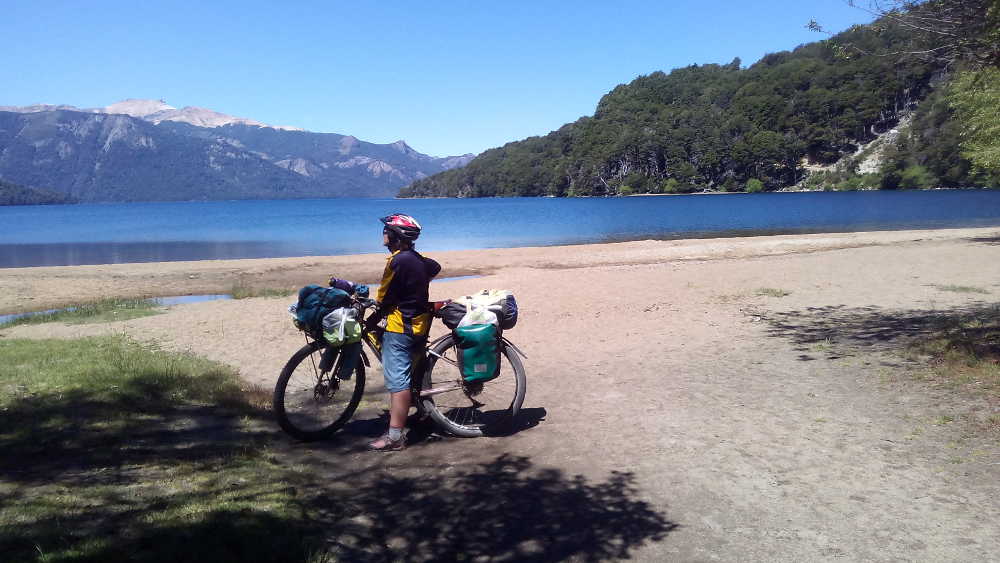 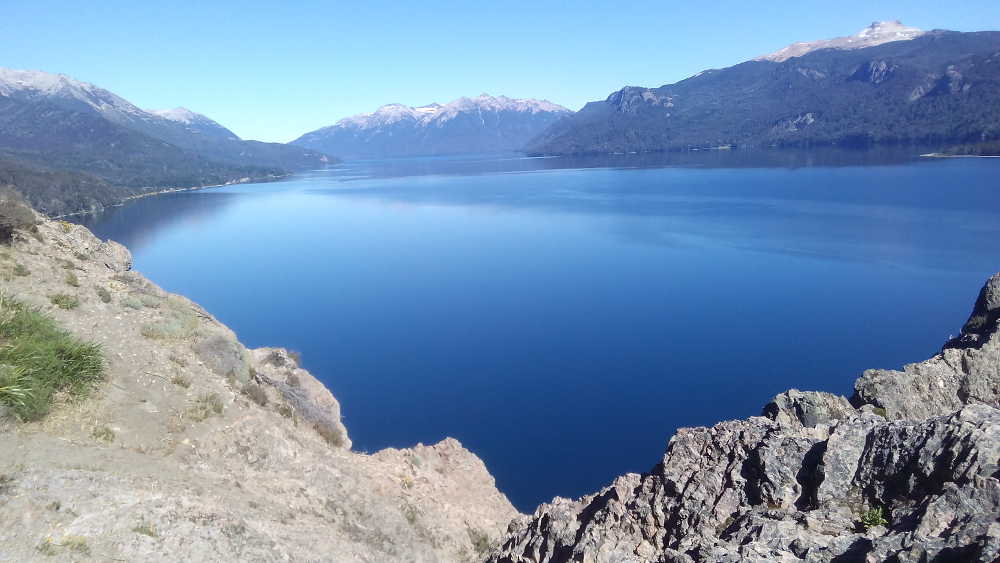 Cycle touring has you smiling one day and grimacing the next. When we left the campsite on Lago Traful we were expecting a day of pushing up steep hills. We left the campsite in ‘granny gear’ (the smallest one) to tackle a particularly nasty climb. It took us up to the viewing point of Lago Traful. There was perhaps one more of the really nasty climbs then the valley began to broaden. We followed a wide river with American rocky mountain style scenery – some rolling hills and lots of downhill. The weather was perfect, even having to cycle on ripio wasn’t a problem. 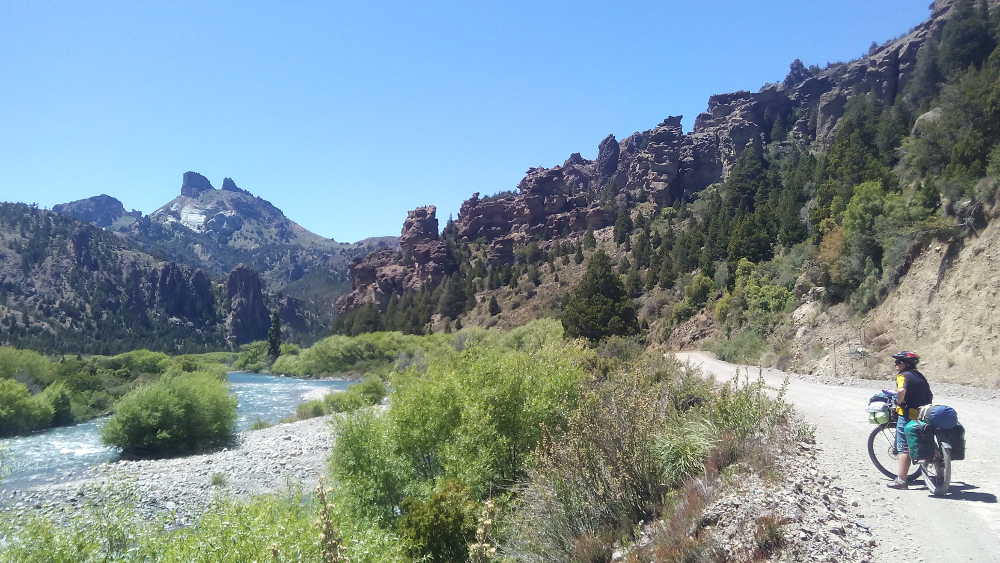 Back on the asphalt we followed another Rio Limay that was flowing from Lago Nahuelhuapi. A beautiful area with the river lined mostly with large willow trees. There were plenty of opportunities for camping beside the river but we had no drinking water. We eventually got to a small town but everything was closed (it was Sunday) so we ended up in the local campsite by the river. The other campers turned out to be Argentinian climbers. The area around Bariloche is a popular climbing area, having some very craggy rocks. 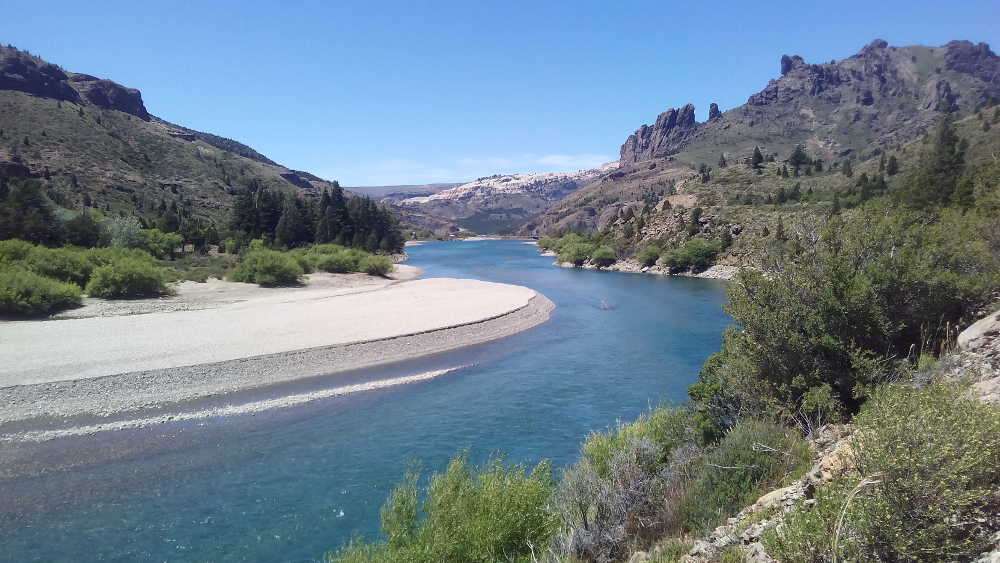 Rob had been warned that the next day might be a bit wet in the afternoon, however when we left the campsite, it was already under a covering of cloud. As we progressed along the road the wind got up as it often does with a change of weather systems. To begin with we were in the protective shadow of various hills but as they flattened the going got harder. When we got to the town of Diana Haupi there was no protection and we ended up cycling on the hard shoulder of the opposite side of the road. The wind was westerly and hitting us sideways – almost literally. An unexpected gust could have pushed us into the road. The nearer we got to Bariloche the busier the roads got – holiday makers in their cars, lorries making final Christmas delivieries and coaches bringing in more tourists.

As we stopped at a supermarket for provisions and lunch a light drizzle was apparent. By the time we had had lunch the weather was decidedly damp. Mother Rob said we should put our full wet weather gear on. Luckily the rain eased a bit so we could take it off. The temperatures were quite warm despite the rain and wind (which was reduced by being in a built up area) and wearing full goretex was too much. 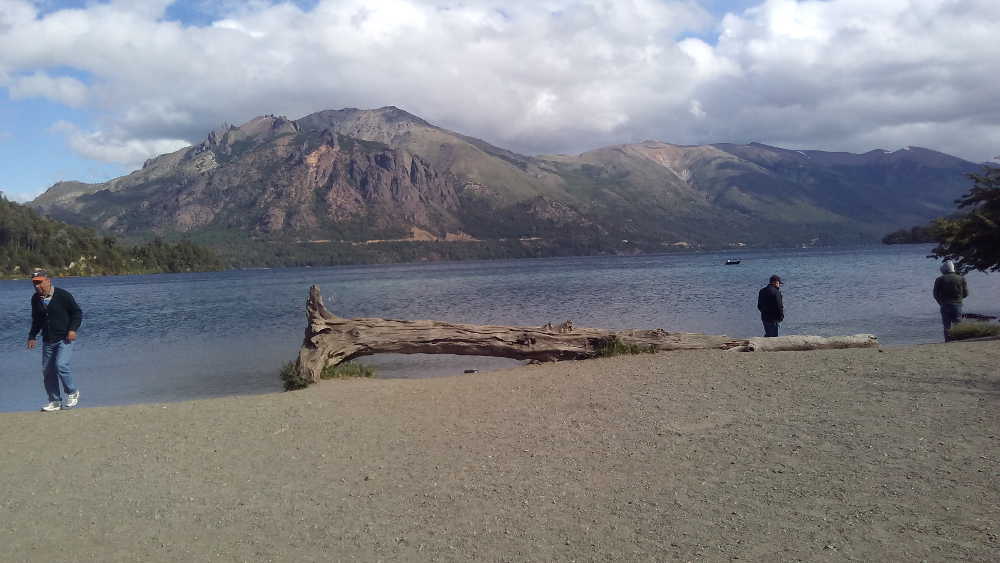 We had decided to stay at Lago Guttierez close to rather than in Bariloche as it was cheaper. We took the road around the back of Bariloche, seeing the housing estates the cleaners and gardeners live in before seeing the town they service. We also passed the local refuse tip. As usual the plastic bags had spread themselves around the surrounding countryside. By this time it was raining on and off. We were also very tired, so to find out we had overshot the road to the campsite and had to climb up the big hill we had just zoomed down was to say the least upsetting. A short break, some chocolate and water and we finally got there. Despite the less than scenic route there Lago Guttierez was also full of large expensive holiday homes. It was also, thankfully, a lot quieter than Bariloche.

Just as we got to the campsite the rain really started and for the first time we had to put the tent up in a downpour. The next day promised to be wet so we decided to stay and ended up staying for Christmas. We had steak on Christmas Eve because of the difficulties of keeping meat without a fridge and healthy butternut and vegetable soup on Christmas Day. 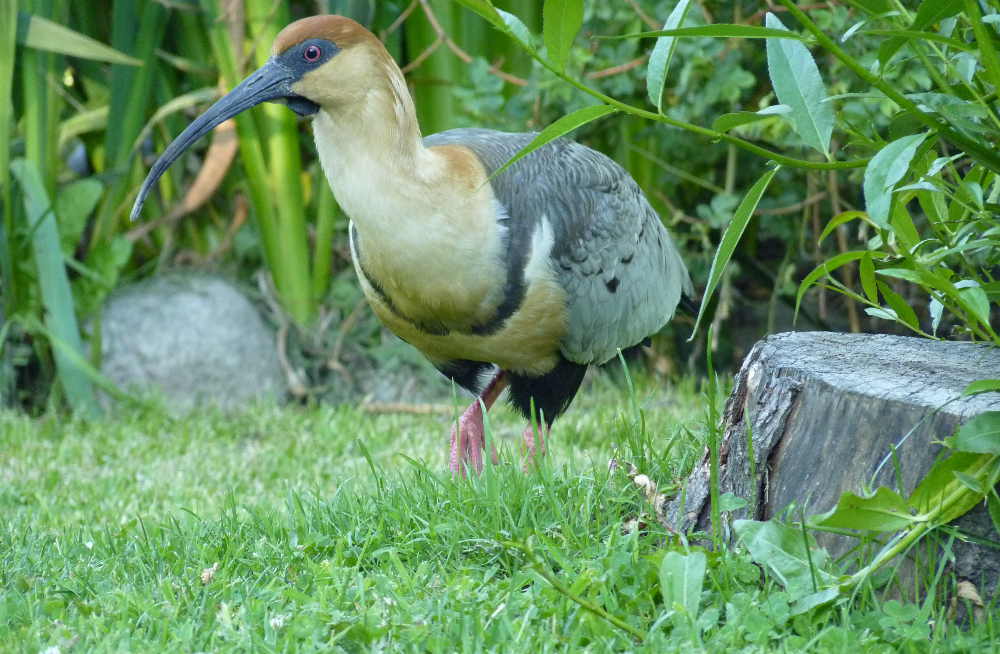 Camera-shy ibis at the campsite

The campsite had a number of animals including a pair of ducks who seemed to like hanging out near us and an Ibis pair who didn’t like being photographed. Christmas day seemed to be celebrated with an asado in Argentina but the music levels were thankfully kept to a reasonable level. The area next to the campsite was an area the public could use and there were several families swimming in the river (the weather had improved) as well as eating large quantities of meat. Neither in Argentina or Chile did there seem to be as much fuss made about Christmas as in Europe. We were perhaps protected from a lot of it by not being in large urban areas or watching TV but decorations (at least external ones) were kept to a minimum and the shops didn’t have lots of Christmassy things on display. 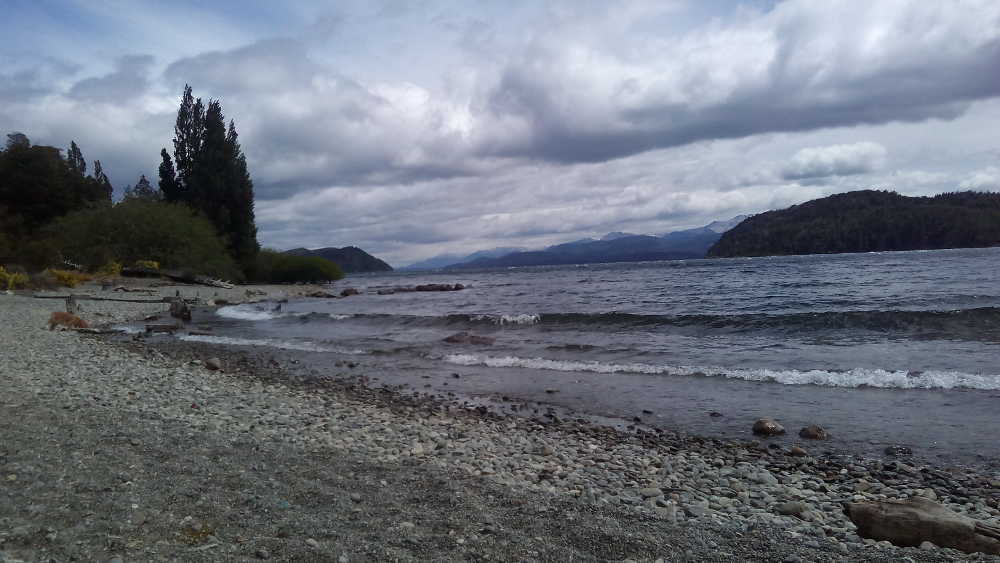 On Boxing day the shops were open so we could restock and hit the road again. We were heading back to Chile via Villa La Angostura and the Cardenal Antonio Zamorre pass. Rob had done some cycle maintenance during our time off and the bikes seemed the better for it. Progress was rapid to begin with although the road was very busy. We left by cycling to and then through Bariloche. There was some sort of festa on which accounted for some of the traffic. Bariloche is the chocolate capital of Argentina but because we were camping some distance away and we were distracted by other things we never did try it. An amazing remiss on my part as an ardent chocolate fan.