8th. December
The route from Temuco to Villarrica was very a scenic pastoral one. There were cows in fields, farmhouses and the houses of the rich with large gardens. We had hoped to ‘wild camp’ along this stretch of road but it was all fenced off as private property, even taking a comfort break proved difficult. The Chilean roads also provided for reasons for moaning. Although we were on an asphalt road it was not graded. The roads were often straight and you could see for a kilometre or so ahead that it just went up, up, up. Unfortunately Rob, chief photographer, was in no mood for taking pictures. His hay fever had returned with a vengeance and he was feeling miserable. Eventually we found a camp site that was open and happy to provide us with a space for the night. It was a beautiful riverside location. The only drawback was the lack of hot water for the showers. I braved the cold water, Rob lay in the tent and recovered. The next day the journey included 21km of gravel road, some of which was rather steep – we ended up pushing. 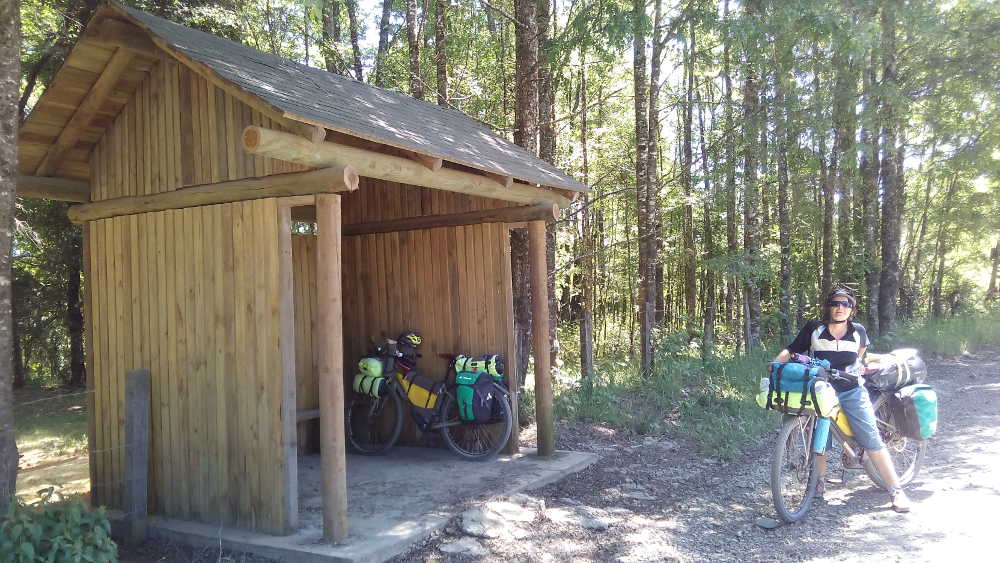 On arriving at the town of Villarrica you can look down from a viewpoint onto the lake and the snow topped volcano – it was stunning. Rising to 2840m Villarrica is an active volcano, having last erupted in March 2015. The name of the town, Villarrica, as Juan in San Javier, pointed out means ‘rich town’ in Spanish. The shops selling designer gear underlined that fact. Apparently the current President, Michelle Bachelet, and the previous one both have holiday homes around the lake. Further up the road, Pukon is apparently the adventure capital of the Lake District with lots of different sports on offer.

We pedalled into town for a late lunch and then found a reasonably priced campsite (in need of facelift but 10 mins from the centre) to set up home for a couple of days. We had intended to cycle to Pukon the next day and have a look around but Rob was still not feeling great so we concentrated on doing our washing, eating and sending some of Rob’s surplus baggage on via post to be picked up by us at a later stage of the journey. He also managed to pick up a fetching pair of goggles with polka dots to protect his eyes from the pollen. Luckily the polka dots were not very visible from a distance.

One of the benefits of being further south was the longer nights. Along the coast sunset had been at round 9pm, now in the Lakes it was 9.30 ish. This gave us plenty of time for cooking dinner without the use of torches. In the north we had often been tucked up in bed by this time as the evenings were a lot shorter.

11th. December
We left Villaricca to cycle to Lican Ray and Lake Calafquen. Here we found a campsite in the forest with access to the lake. The lakeside view was, we thought, better than Villarrica with a sandy beach – no concrete promenade – and steep mountains seeming to surround all sides of it. The town was smaller and less prosperous but pleasanter as a result. It was Rob’s birthday so we bought some meat, wine and the trimmings and had a barbecue. Rob also bought himself a bottle of ‘Jack Daniels’ whisky – not sure if it is the cycling or me turning him to drink. Normally we have a pet when we are camping. In Villarrica it was the owner’s cat, who seemed to be in need of a comfortable lap as much as any meat scraps we might have. In Lican Ray some small birds of prey turned up to clean up our meat scraps. They were remarkably tame. 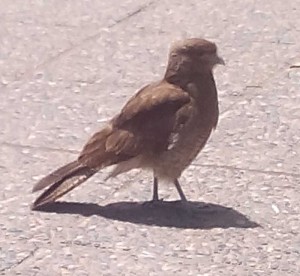 We had intended to carry on the next day and then book ourselves into a hostel for a couple of nights as the weather forecast was promising some heavy rain. However the campsite at Lican Ray was quite cheap and had the advantage of having a large tarpaulin over the camping spot to protect the tent and occupants from either sun or rain. The theory worked on the Saturday during the day when the rain was still quite light and the temperatures still reasonable. However that night and all day Sunday the rain really set in North Wales style and the temperatures plummeted. To add to our discomfort a youth group turned up supervised by adults; camping opposite us, eating on one side and playing games – table football and table tennis – on the other.

We decided to move into one of the cabanas (cabins) that the campsite had and that were also reasonably priced. It had heating and a TV so we were set up for the day! Cabanas are very popular with Chilenos as a more comfortable accommodation than camping but cheaper than a hotel. Some of them are smaller than garden sheds and constructed to a similar standard. It was while watching television that we surmised that Viejo Pascua means Father Christmas in Chilean Spanish and the Pan de Pascua we had been eating was in fact Christmas Cake. Despite the decorative Christmas trees on it, I had assumed it was some sort of Easter cake, in the shops early as pascua with various different spellings in French, Italian and Castillian Spanish means Easter. This highlights some of the language problem here with words having different meanings in the different countries. Banos generally means toilet in Chile and Argentina but apparently it is used to mean a shower in Bolivia… Anyway Chilean Christmas cake is like a rich English fruit cake with quite a bit of alcohol, tastes wonderful to someone deprived of the aforementioned fruit cake for some time and is just the right sort of food for hungry cyclists. 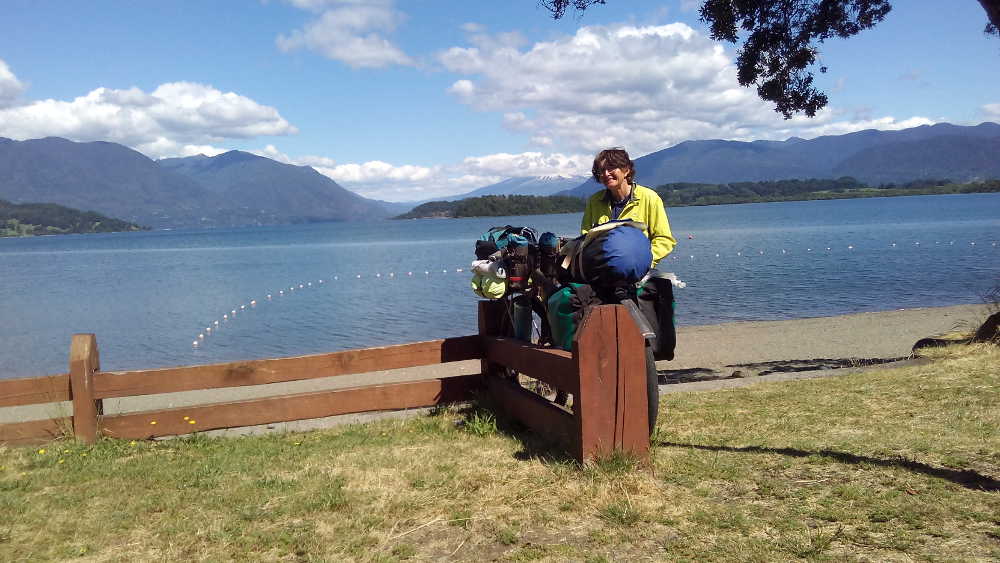 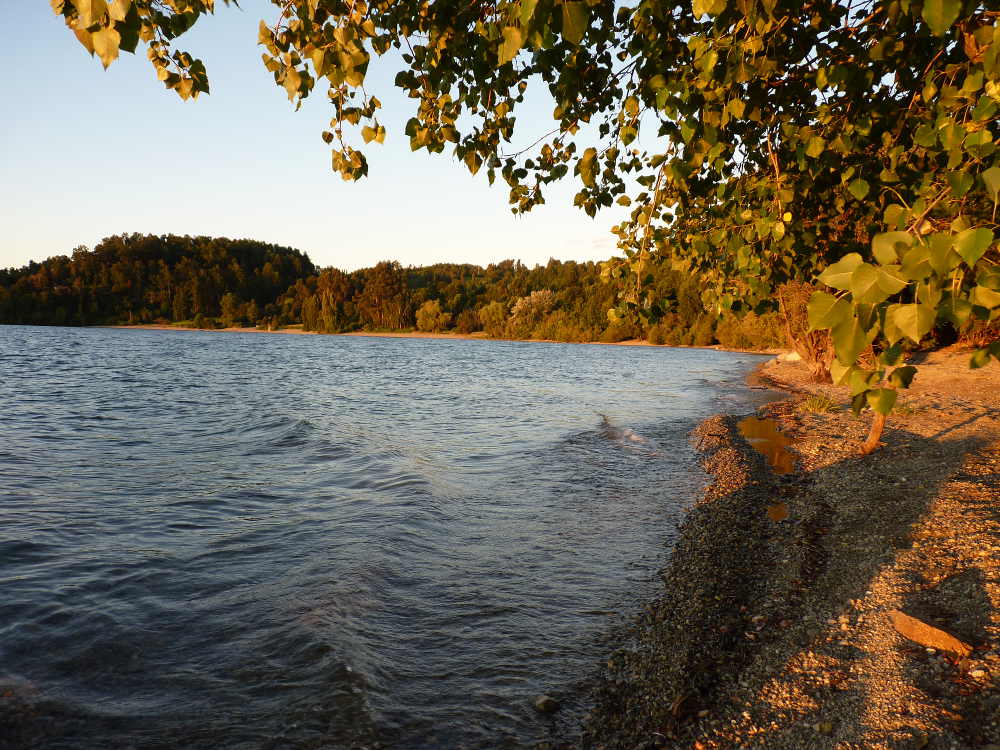 Lago Panguipulli from our campsite

The weather forecast proved to be remarkably accurate and the day started sunny/cloudy and slowly improved. We made our way to the Lake and town called Panguipulli. Spring was in full bloom Along the roadside bramble bushes were in bloom, as well as broom, fuschia and foxgloves. We stopped in the town to stock up and have lunch at the lakeside. Then we made our way to a lakeside campsite at Puerto Coihueco that the very organised tourist information had told us about. At first the price of camping was rather high but instead of paying and getting annoyed about it as we had before, we told them it was too high and he dropped his price. We found out next day there was another campsite just down the road.

15th. December
We pedalled on heading in the direction of Puerto Fuey. Much of Lago Panguipulli was fenced off as private property or was covered in steep forest. There were only about four viewpoints where you could get good views of it. At the end of the lake we passed through a place called Punahue and then Neltume. Again the tourist information told us about a camp site a little out of town, unfortunately when we got there it was still closed. The campsite was part of a large hotel/cabanas set up in beautiful wooded grounds with a river running at the bottom. The grounds were open and there was no one around so we ended up staying there the night. There was little other opportunity to camp. 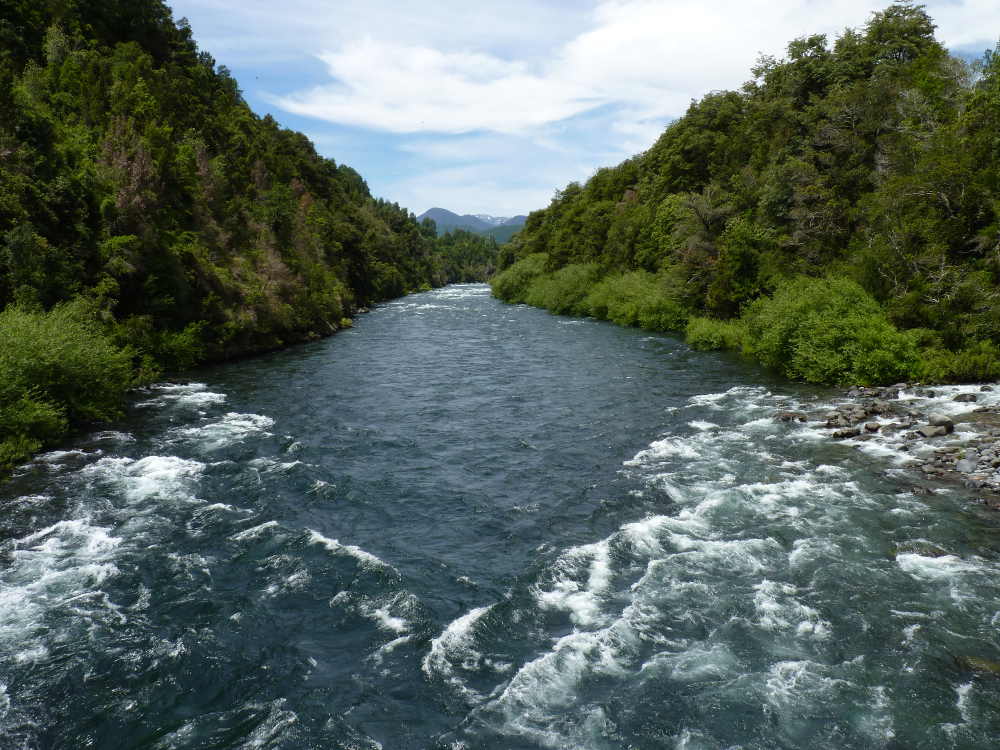 Rio Llanquihue on the way to Puerto Fuey 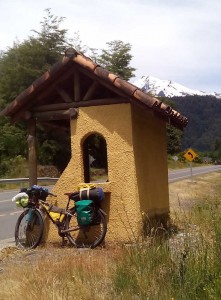 Another bus stop on the way to Puerto Fuey

16th. December
We arrived in Puerto Fuey to take the 8am ferry to a small harbour just inside the Argentinian border. The ferry was not expensive and saved us having to cycle up some high pass to get back into Argentina. Our destination was San Martin de los Andes. The ferry trip itself was lovely, allowing us to see the whole of Lago Pirhuelco. The lake is surrounded by steep forested mountains so it really is the only way to see it. In among the trees the odd jetty was visible, where people had built themselves cabins for fishing but otherwise the area was too steep for human habitation and a lot of the woodland seemed to be indigenous. 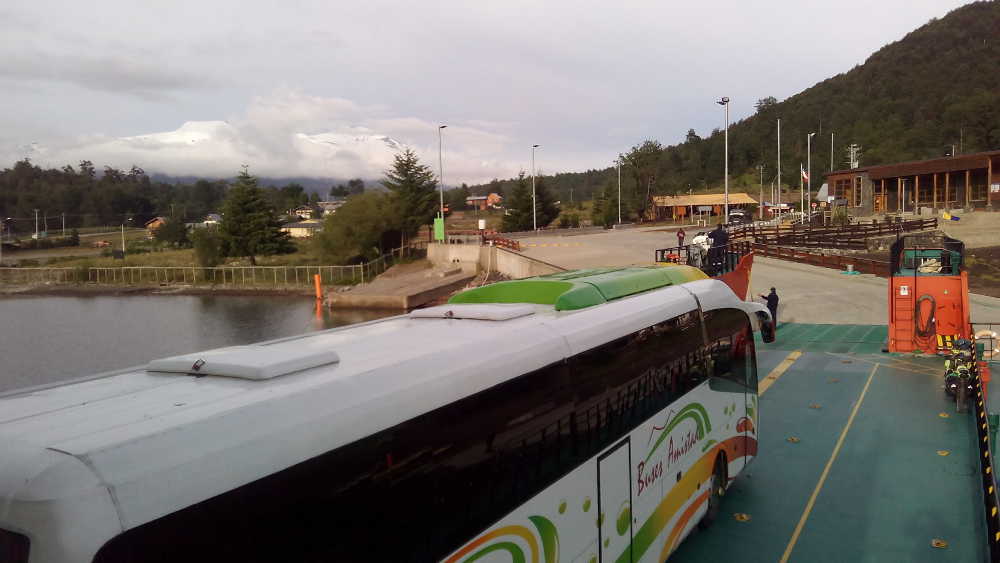 Puerto Fuey from the ferry 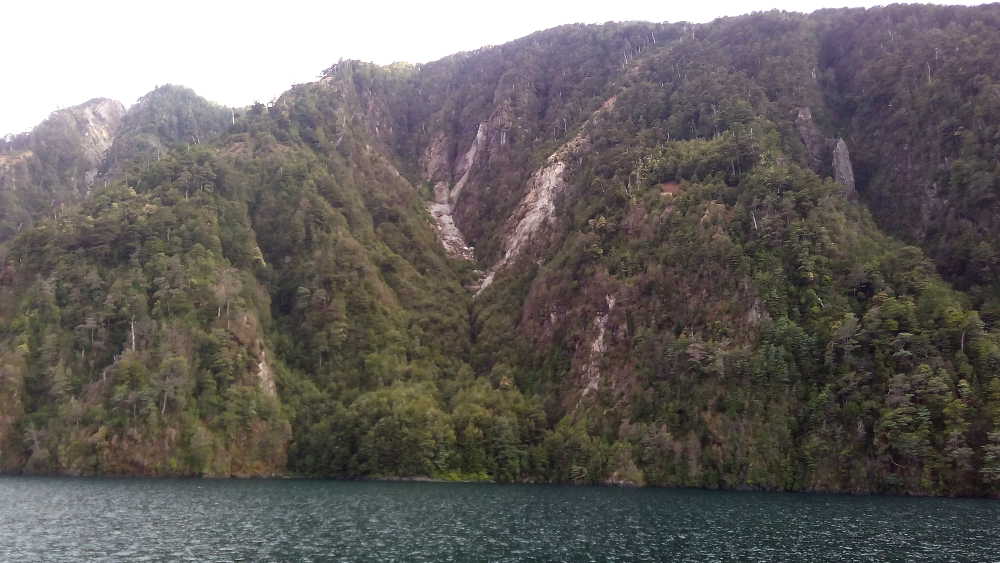 The view from the ferry

After the ferry trip there was then an 11 km ride to Huahum Pass (lovely name!) and the border. The formalities at the border were kept to a minimum and after a short time we were back in Argentina cycling on a hilly gravel road, but it was graded, no pushing required – oh joy! The roadside close to the border was brilliant with different bushes all in flower – perhaps one of the immigrations officers was a gardener (they certainly didn’t seem too busy there). Strangely the foxgloves, so prevalent in Chile disappeared and were replaced by Lupins in purple, pink and white. This theme continued for much of the journey. After leaving the village of Huahum just after the border, the lake disappeared largely from view apart from occasional glimpses as we cycled through forest. Eventually in late afternoon we dropped down steeply into San Martin, which sits in a bit of a bowl at the head of Lago Lacar surrounded by more heavily forested steep mountains. 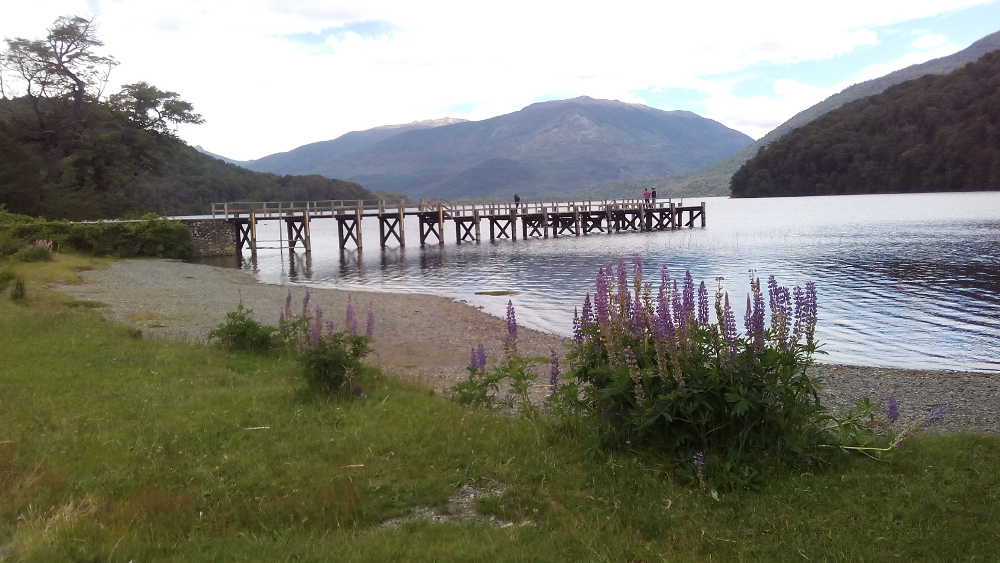 Lake Lacar from the village of Huahum

After some research and not a little domestic discussion we established that the campsite was 5km out of town on the other side and up a hill so we decided on an ‘economic’ hostel for a couple of days. The word ‘economic’ in this area is a relative expression. San Martin, like Villarrica, is a big tourist destination and we arrived at the beginning of the summer season/Xmas holiday season. The town is geared up for tourism, selling sporting adventure in the nearby regional parks or on the lake. There were also a number of very high end shops selling all the gear an adventure sportsman/woman could possibly need.

We stayed two nights largely because the weather the day after our arrival promised to be cold and windy with the possibility of showers. The day after that was to be warm and sunny with little wind. Which is exactly what happened. During our stay we found out that the new Argentinian President had floated the peso against the dollar immediately after taking office. This meant there was no more ‘cambio blu’, you just went to the bank as in any other country to change your dollars. This will make life a lot easier and cheaper for the tourist, but there will be a lot of men with calculators who used to lurk around the exchange bureaus offering ‘cambio blu’ in the bigger cities looking for alternative employment. The hostel owner also told us the cost of certain items has also gone up. Rob, who has a mind like a computer when it comes to prices, noticed that the price of meat had increased quite considerably, presumably the subsidy had been removed.

2 thoughts on “Chile – The Lake District”