26.11 – 11.12 And now for something completely different… After the Lagunas route we had originally intended to cross back to Argentina but the cost of coach travel there was very high. With the added complication of having to send the bikes separately and at extra cost we decided on continuing our journey through Chile.

We spent two nights and days in three coaches before arriving somewhat bedraggled in Concepcion, south of Santiago, at 6am in the morning. Luckily the Chileans are into their coffee as much as any European. After an injection of caffeine we cycled to the small town of Tome just north of the city and spent a couple of days recovering. The reason for visiting this area was a blog Rob had read of another couple at www.big-sur.co.uk. The route followed La Ruta del Mare – visiting small fishing villages and enjoying some wonderful coastal scenery. 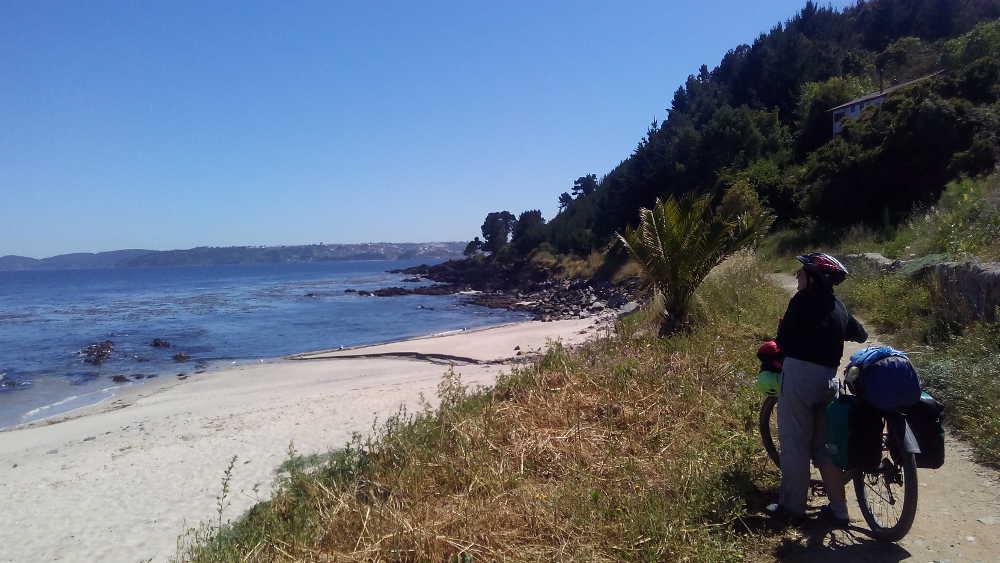 28 – 9 in Tome – We arrived in Tome at the weekend, so the hotel with views of the sea was already full and we had to make do with views of the supermarket carpark. However it was cheap and we were two minutes walk from the beach. We spent a day sitting on the beach doing nothing and checked out a restaurant there, which oddly despite the fresh seafood market opposite, specialised in frozen fish dishes from the supermarket. 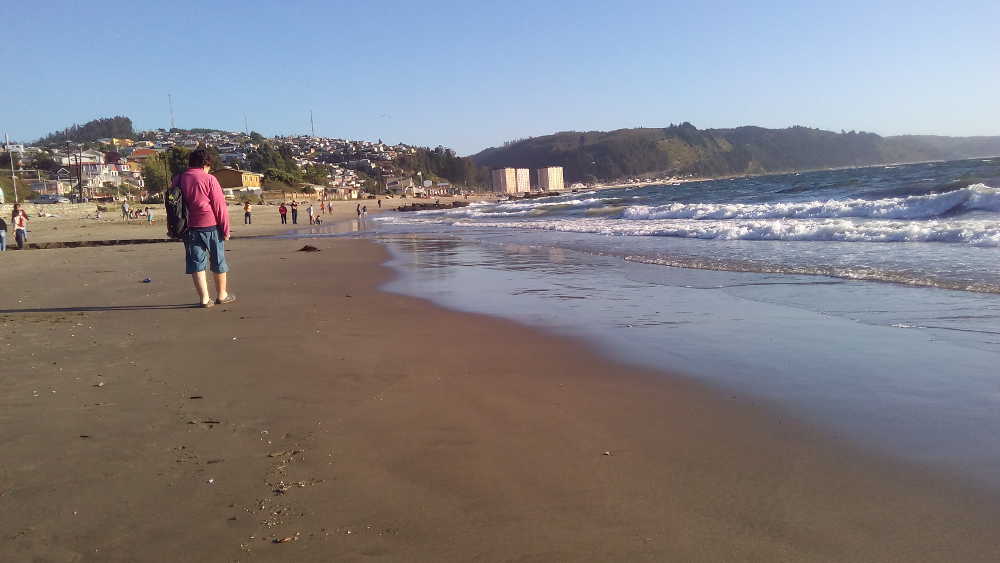 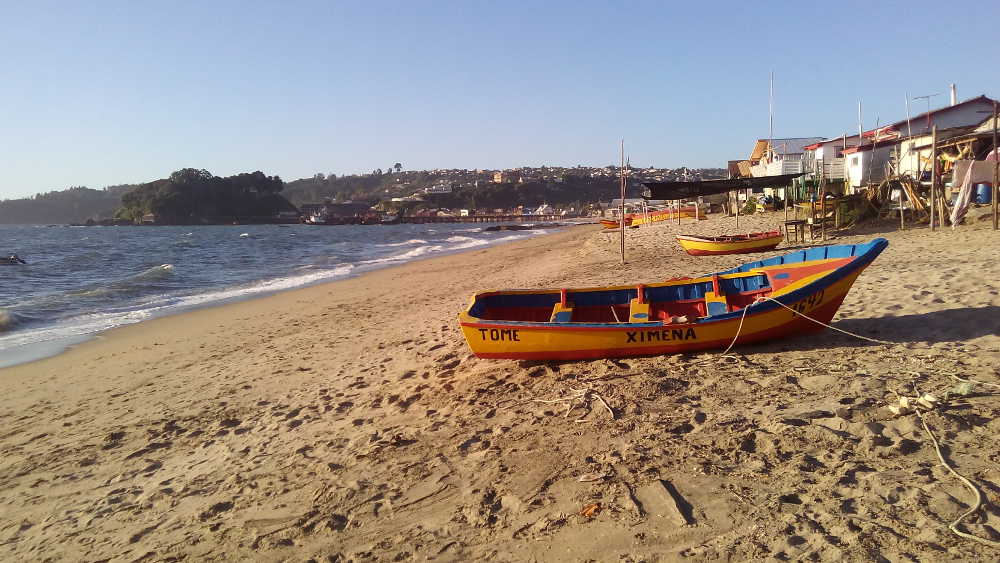 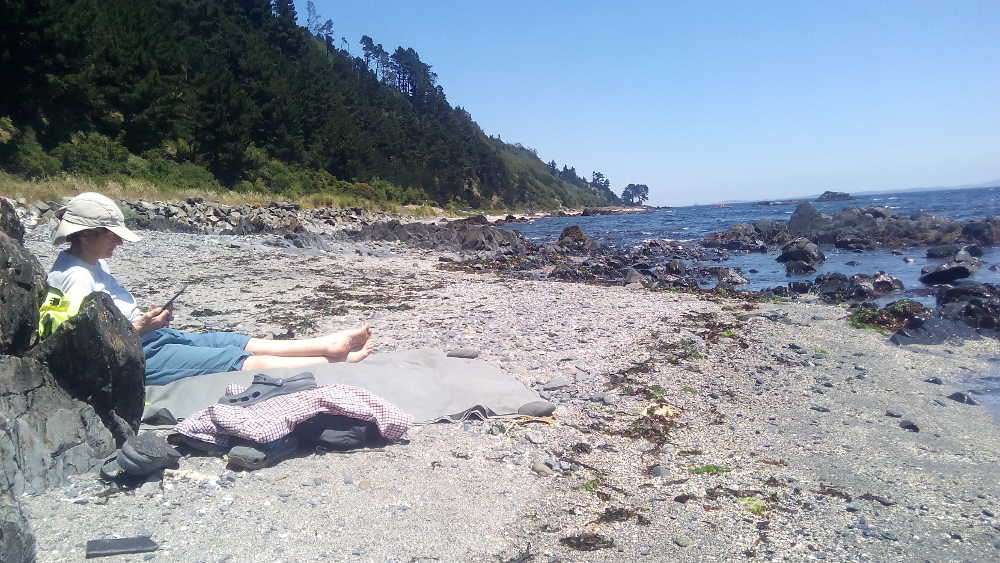 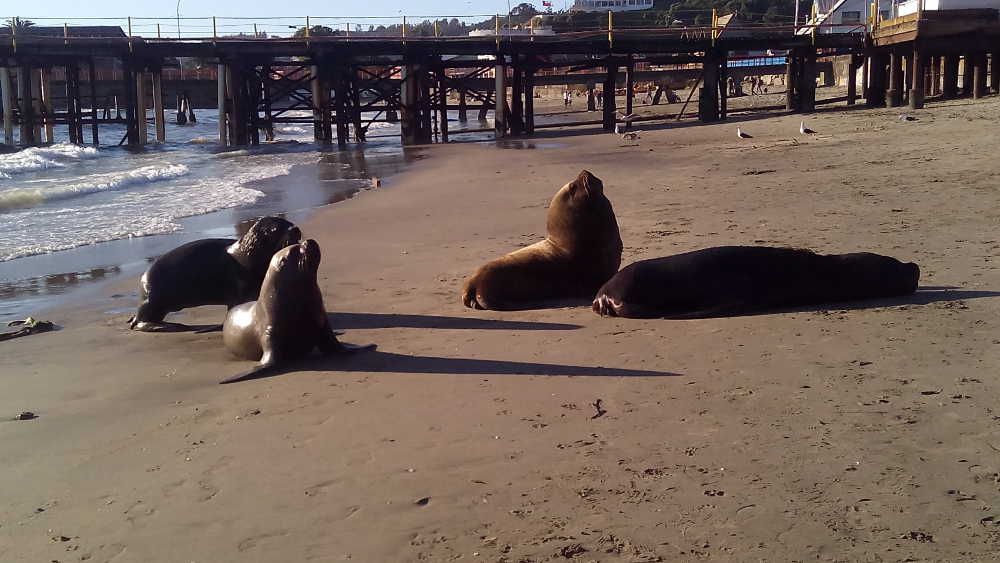 Sealions hanging out on Tome beach 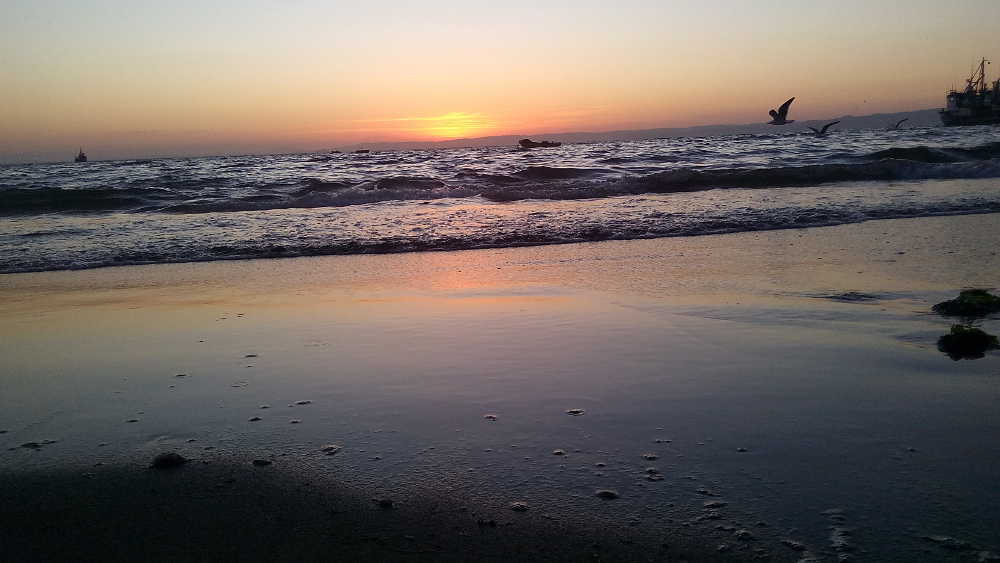 Sunset on the beach at Tome

30th. Leaving Tome on Monday morning involved a lot of pushing up a very steep, narrow and busy road until we reached the main road. The whole area was hit by a tsunami in 2010 and the village of Dichato that we passed through had apparently been almost entirely destroyed. When we got there extensive renovation work was in progress and measures were being put in place to reduce the effects of any tsunami in the future. 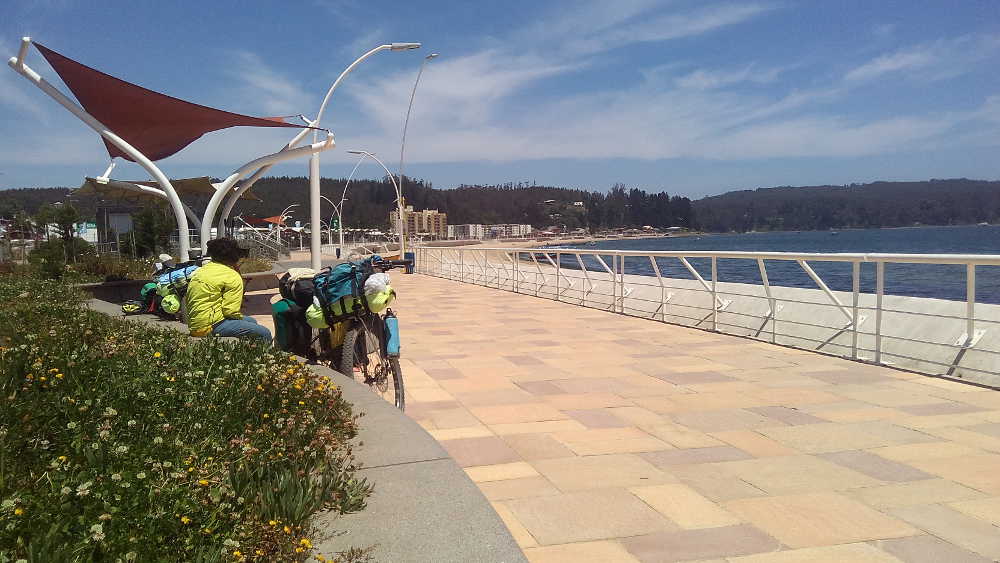 The road we followed after this was largely gravel, was very steep and best attempted in a vehicle with an engine. We spent a great deal of time pushing and covered a relatively short distance. However the views were fantastic and the coves we visited in between the hills were lovely. We eventually opted for one to camp in – apparently camping on the beach is quite accepted in this area. 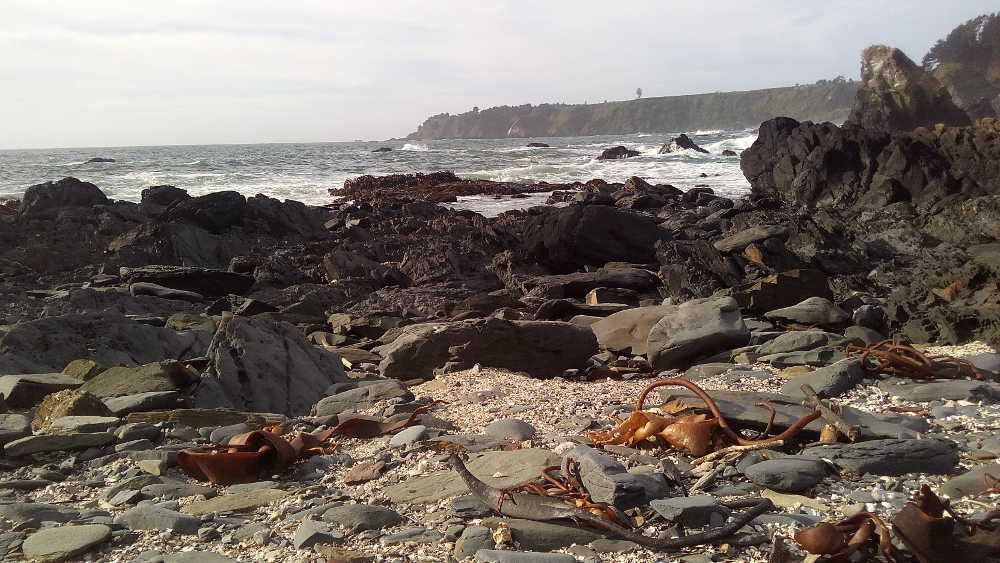 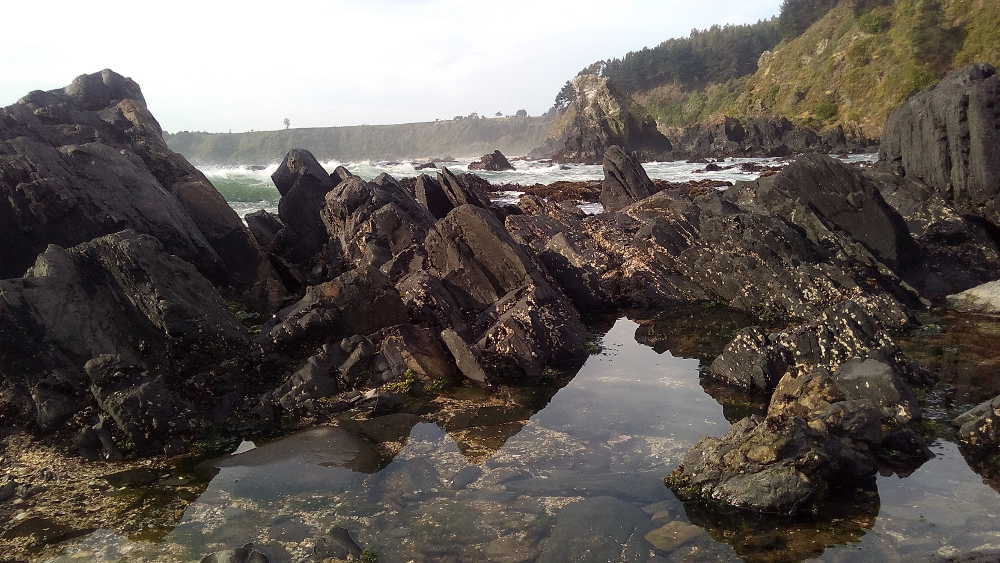 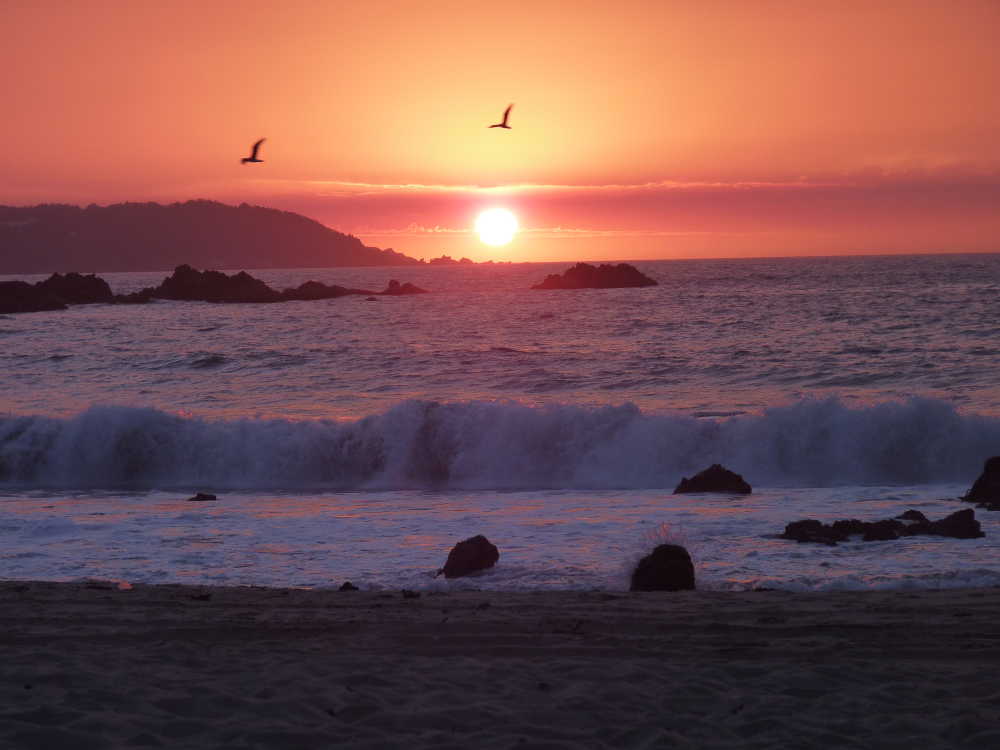 Sunset on the first beach we camped on

The following day we arrived at a small village called Vegas de Itata, where you should be able to get a boat to row you over the river. Unfortunately our lack of language skills meant we failed to find the right person to row us and ended up cycling to Treguaco to cross the river. Although this was an extra 40 km., the ride was actually very pleasant with views of the river, small country houses green countryside and no very steep hills. At first I had been worried about finding sufficient food and water to keep us going ( a hangover from Argentina) but every small community, even the ones not on the map, had at least a mini-market. Food is cheaper in Chile than Argentina and cycling essentials such as chocolate and ice-cream were affordable and available everywhere. 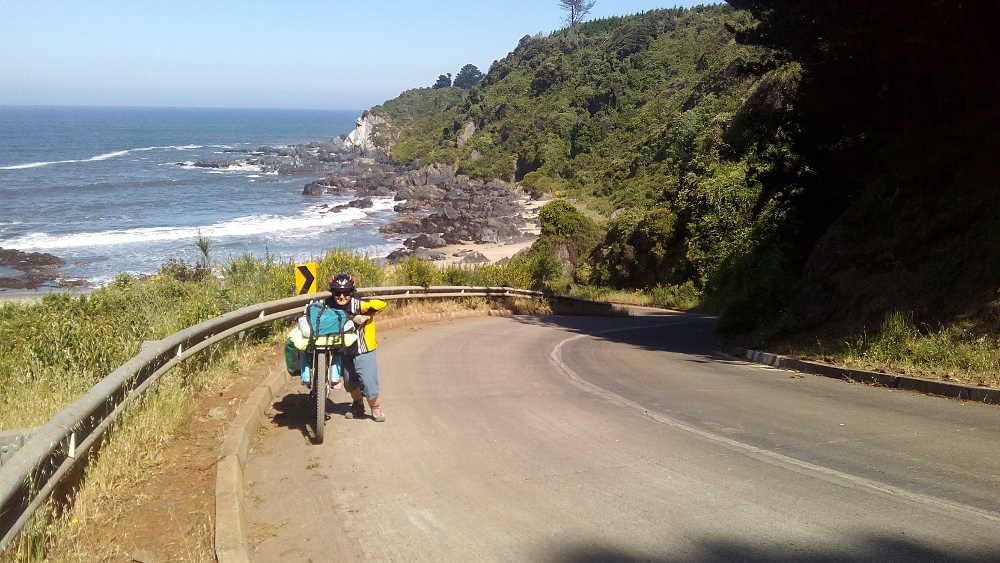 Even the asphalt was hard work at times

Once we were passed the big river the hills started to flatten out a bit. There was a bit of a roller coaster, where you could try to go downhill as fast as you dared on the gravel road to get as much speed to carry you up the next hill. This, of course with due deference to any on-coming traffic, which at one point was two bullocks pulling a cart. Eventually as we arrived in the more touristy areas the gravel gave way to asphalt, making life a little easier. We have read quite a few reports that describe the Chileans as reserved and formal however we found them to be friendly. Several people even coming up to us in the street to ask where we were from and where we were going. One man came up to us specifically to shake our hands – he had seen us the previous day cycling on the road. There was also hooting of car horns and waving. 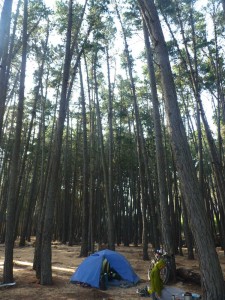 One night we camped among these really tall pine trees 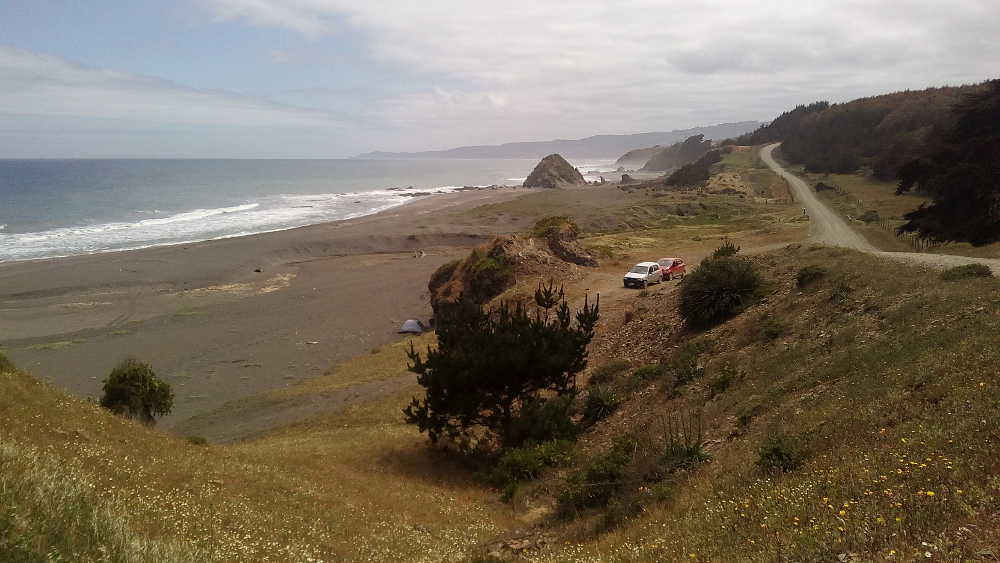 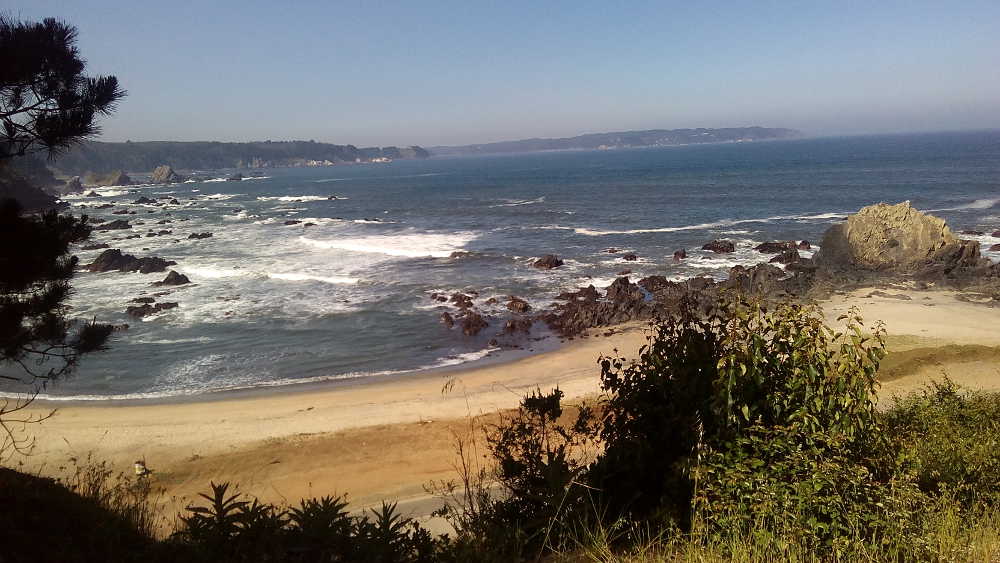 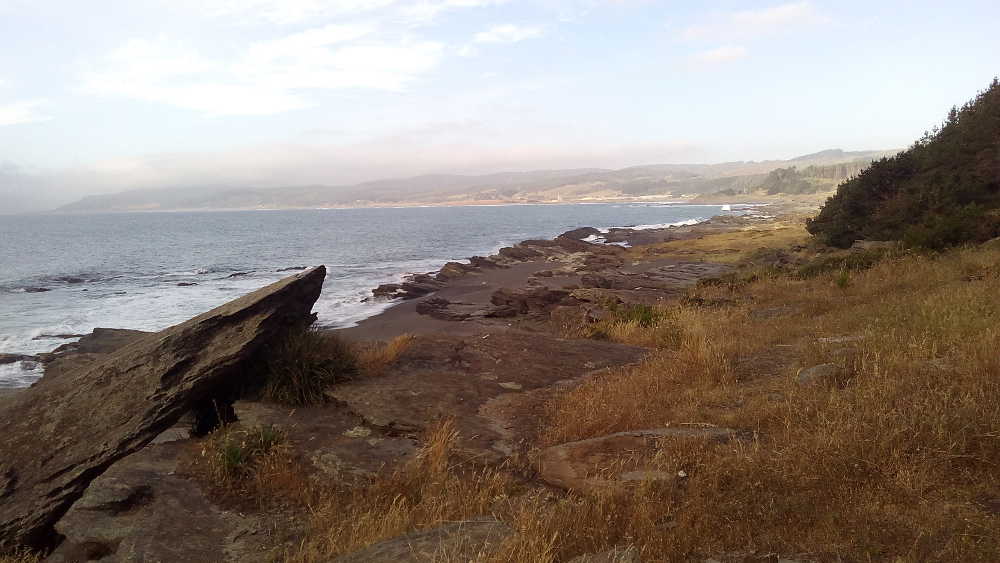 The view from out last camping spot

The whole trip only lasted a week but was a lovely change from the desert. We didn’t cover great distances, partly because of the hills but also because there was no reason to rush. Apart from the coastline, inland the fields and gardens were full of flowers as it was spring. Rob, unfortunately, wasn’t so inspired, as he slowly developed hay fever. 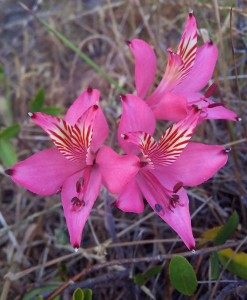 Just before the town of Constitution we turned inland and headed to the town of San Javier to catch the bus to Temuco. While stocking up on food we met Juan, who invited us back to his house for a drink. He wanted to find out why we were in Chile. He wanted to move to the US and couldn’t understand why anyone would want to visit Chile. Having said that, once we mentioned we were on our way to the Lake District, he got quite enthusiastic telling us about how beautiful it was. 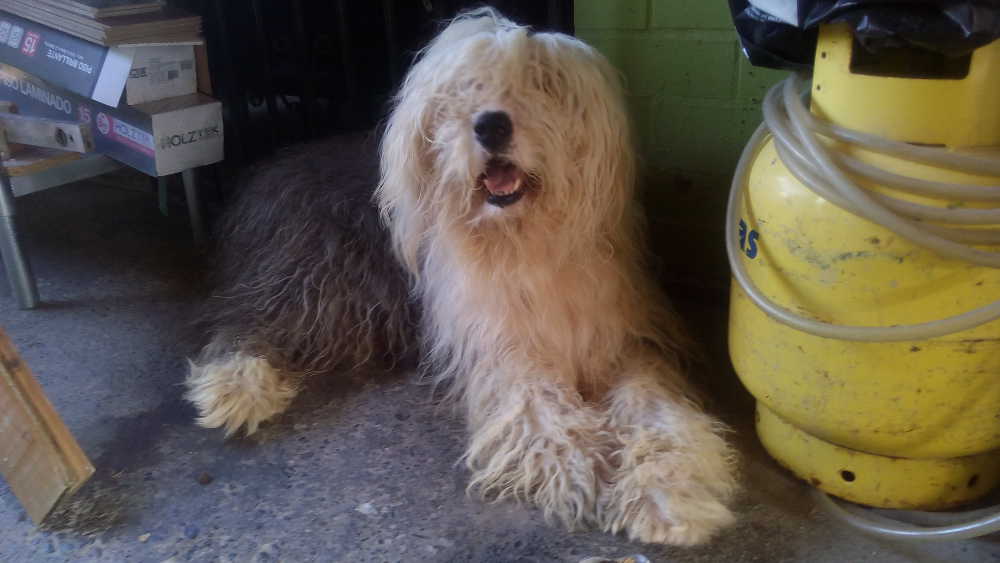 Koopoo Juan’s dog, who we fell in love with

That evening we stood at a bus stop on the side of a busy dual carriageway waiting for our bus to Temuco. The woman who sold us the ticket told us to be patient as the bus may be a bit late. It was an hour late and we were just wondering how long we should hang on when it arrived. She had told us it would arrive in Temuco at 5.30 am. At about 3am the bus conductor woke us to tell us we were there! We spent a cold 3 hours waiting for daylight to start our ride to Villarrica, said to be the gateway to the Chilean Lake District.