The reason for going to Bolivia was to cycle the salt flats at Uyuni, spend the night on a small island in the middle of it all – Isla Incahuasi or House of the Inca – and then to continue on the so-called ‘Lagunas Route’ through the south-west corner of Bolivia into Chile and San Pedro de Atacama. The route is very beautiful but notorious for being very strenuous. It is off-road with lots of washboard, sand and stone. There is also quite a lot of ascent and generally you will be facing a strong head wind – especially in the afternoons. The altitude is another ‘challenge’ with the high point being 4900m above sea level. I arrived in Uyuni with flu like symptoms and breathing problems. Rob was worried about the excessive amount of weight we were carrying (the route is quite isolated so you need to carry large amounts of water and food). In the end we decided it would be too much to cycle the route, so we took one of the many jeep trips that do the Lagunas route.

The clock tower at Uyuni

Uyuni is full of Toyota Landcruisers that take tourists on the Laguna route. They have one driver – ours was called Freddy and he didn’t speak English. There were two Brazilian women in the jeep with us who spoke a little English. When I asked where they came from they mentioned a city. I wasn’t sure where this was, then they mentioned Brazil’s infamous defeat to Germany in the world cup – ah, it was there… We also briefly had an Italian in the jeep with us and a Bolivian couple, who only revealed late in the day that they spoke excellent English. 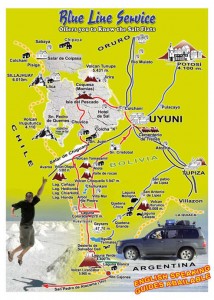 A map of the route (in red)

Double click the map above to enlarge it. It is the map taken from the website of the company we went with but not necessarily and endorsement of them.

The first stop on the jeep trip was at the so-called train cemetery just outside Uyuni, which we had already visited one evening. In the past the town served as a distribution hub for much of the mining industry carrying minerals down to the Pacific ports. The railways were developed by British engineers in large part. When the mining industry collapsed in the 1940s the trains were abandoned. 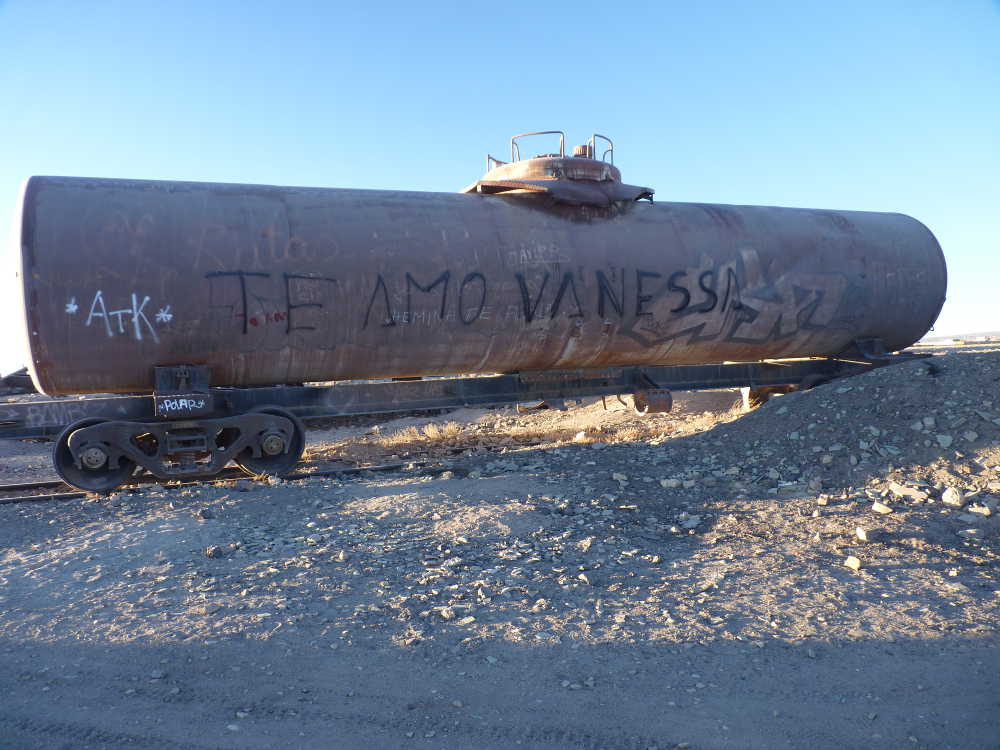 Rob got a little romantic! 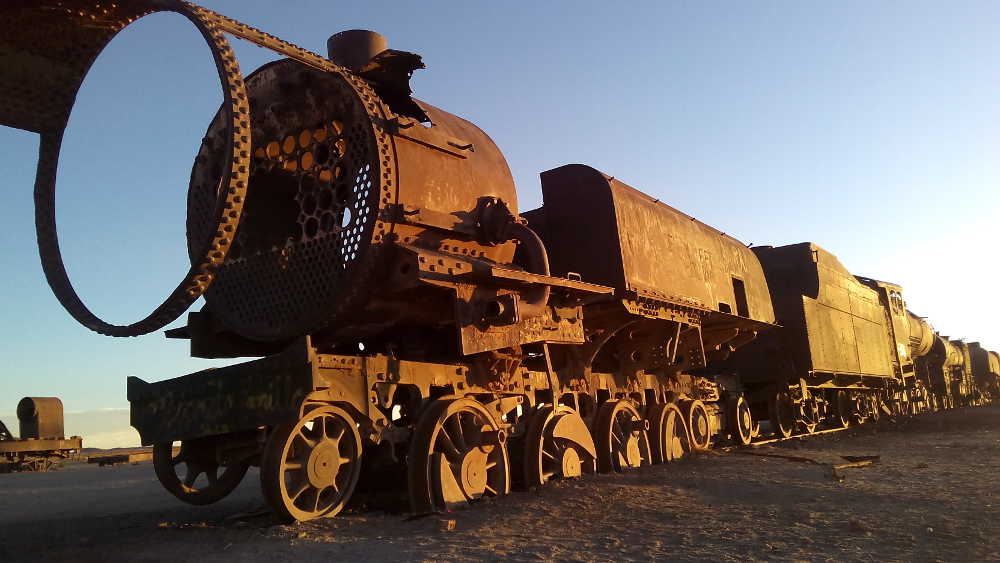 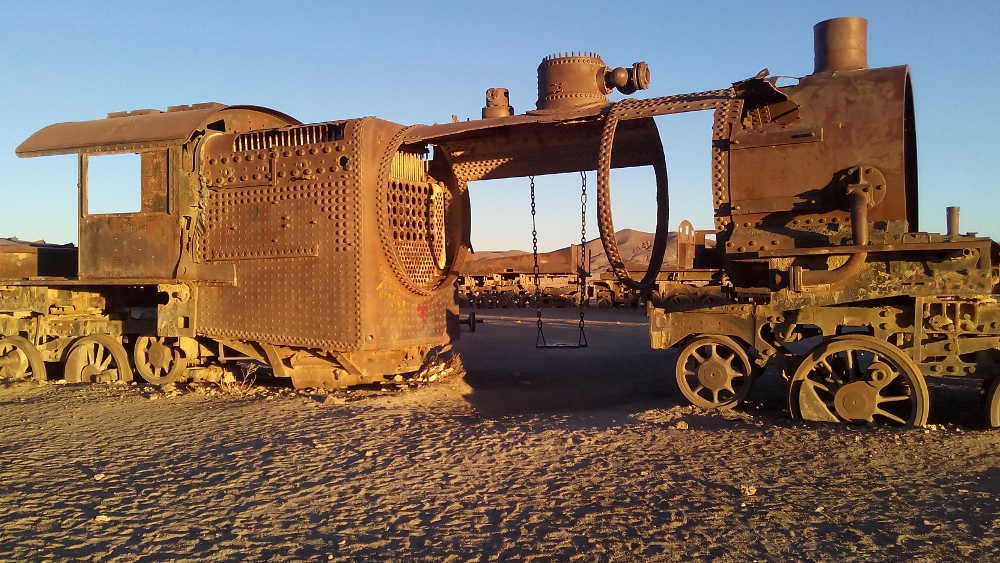 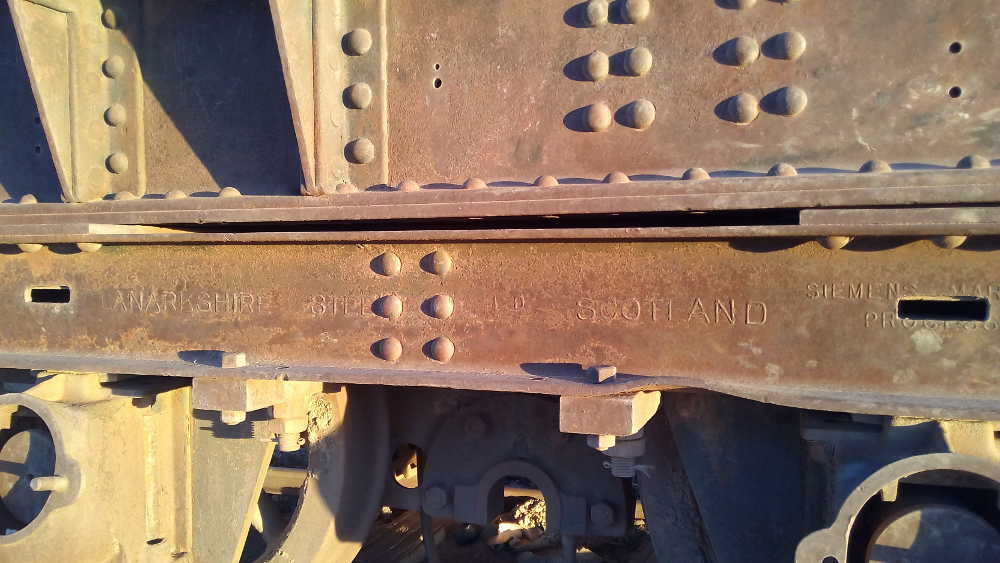 The Salar of Uyuni is the biggest salt flat in the world comprising 10,582m squared. It is at 3680m above sea level. In the centre the salt is 10m deep. We met some cyclists who had camped on the salt. It is very hard so you have to take a stone to bash the tent pegs in. One bloke said all his tent pegs were now broken and he had to buy new ones! 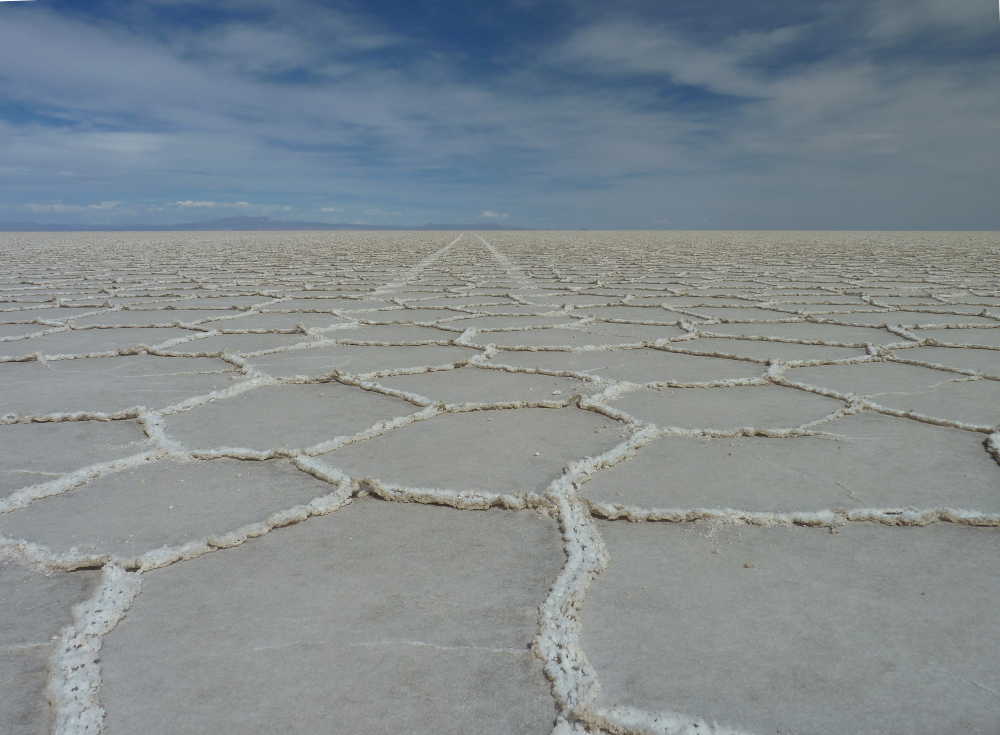 The surface of the Salar 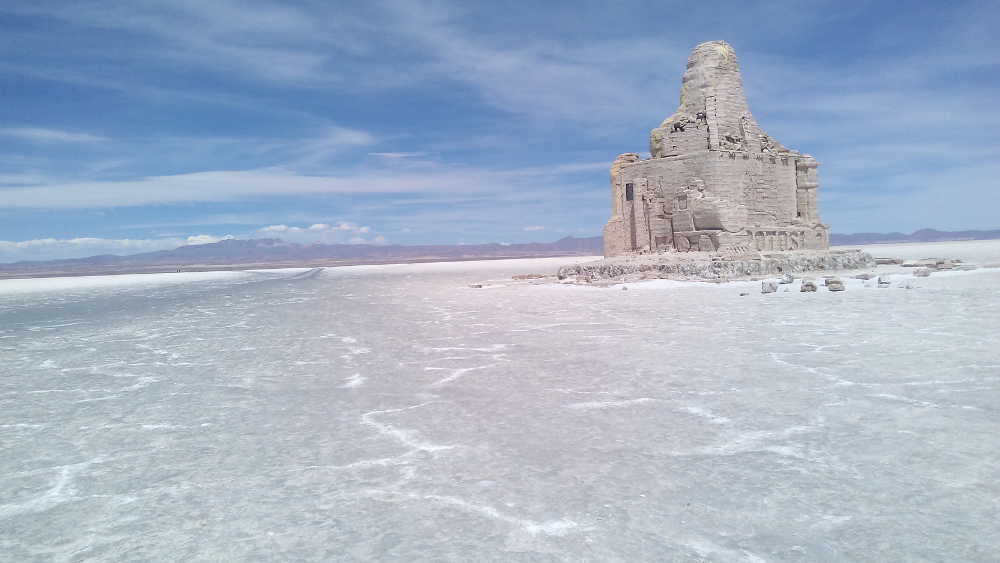 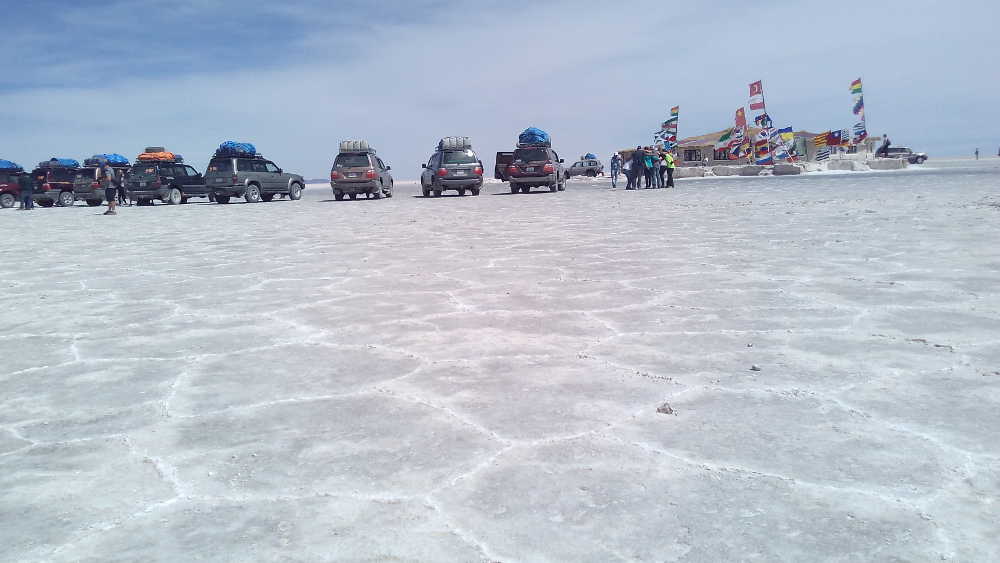 Tour jeeps lined up outside the salt hotel 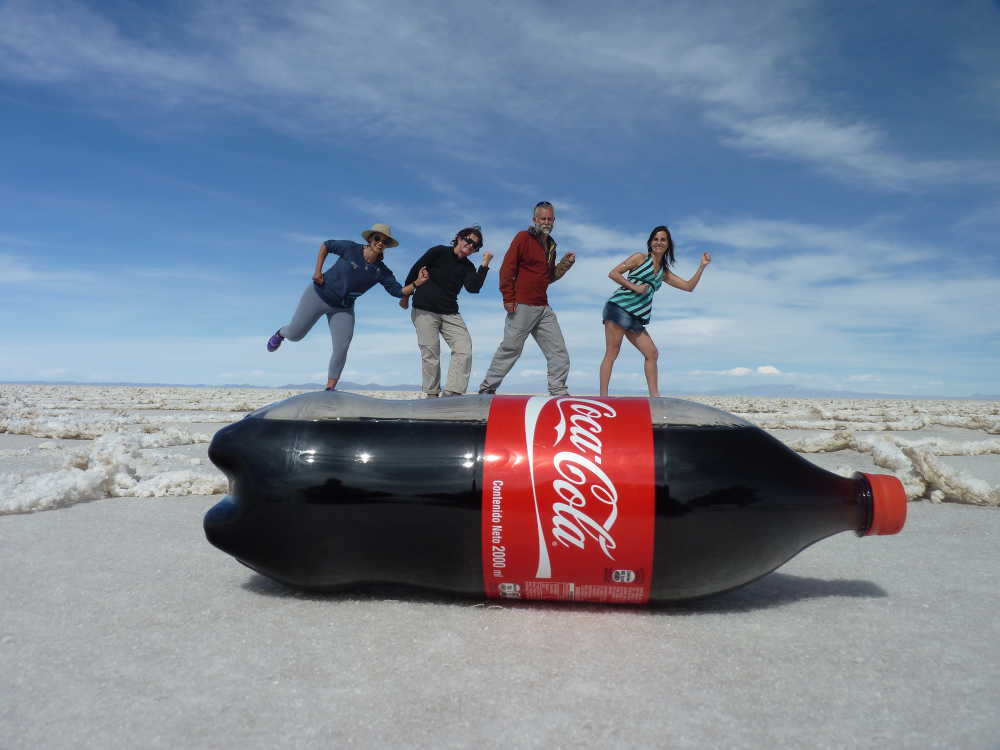 Four on a coke bottle!

There is no sense of perspective on the salt flats so you can take silly pictures as above by just placing a coke bottle on the ground and lining it up with your models.You can buy all sorts of toys such as plastic dinosaurs in Uyuni for the same purpose.

Cyclists can camp on Isla Incahuasi. Some of the cactus on the island are apparently over 1000 years old. They grow at a rate of 1cm per year and some are 9 – 10m high. 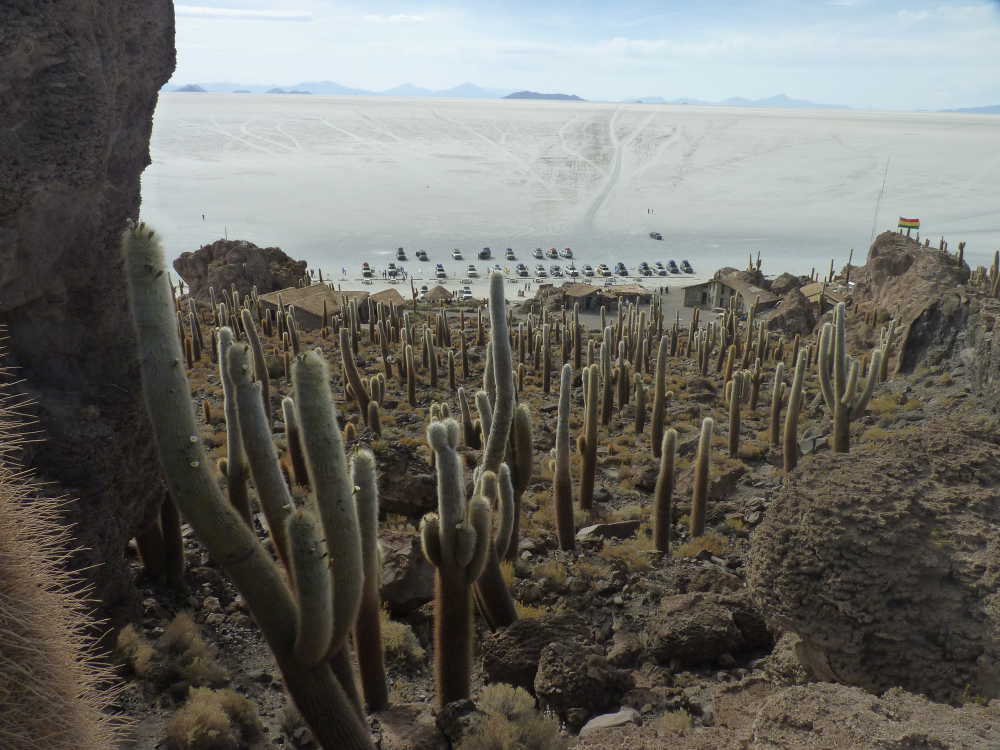 We stopped a couple of times to view rocks eroded by the sandstorm that often sweep over the altiplano. 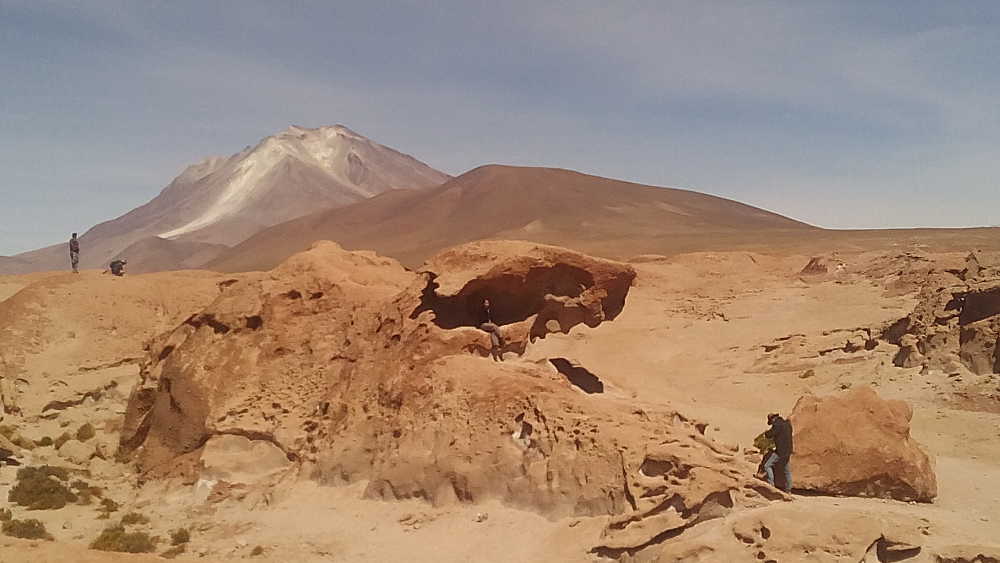 Lagunas Canapa and Hedionda were where the flamingos were located. The first two lakes we visited. There were flamingos on most of the other lakes but they were less visible. 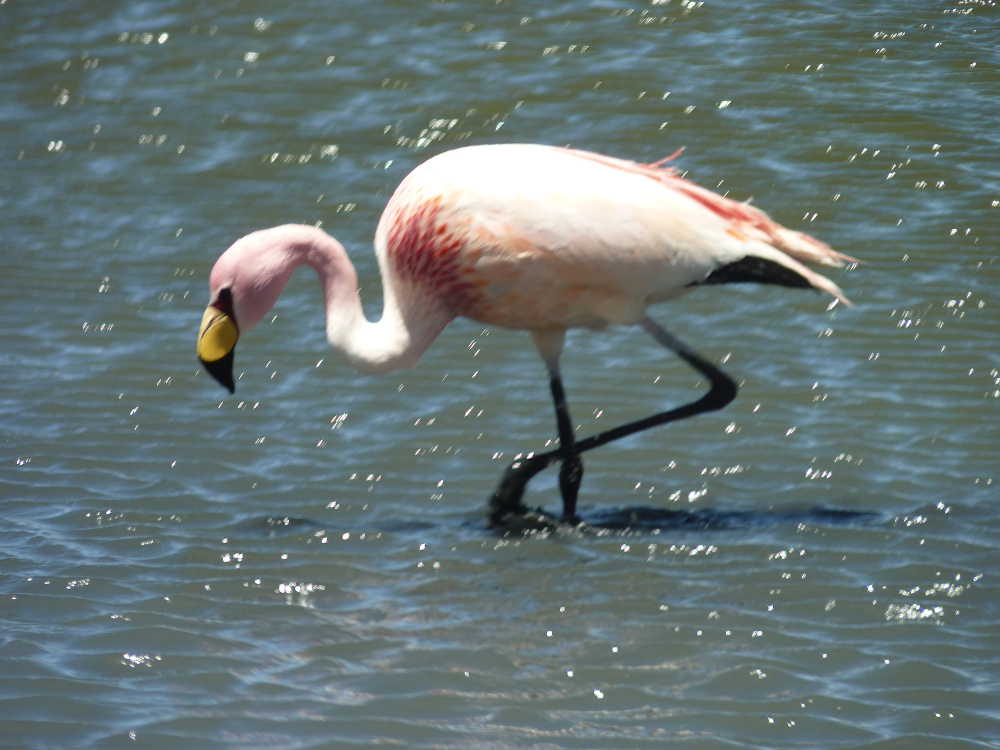 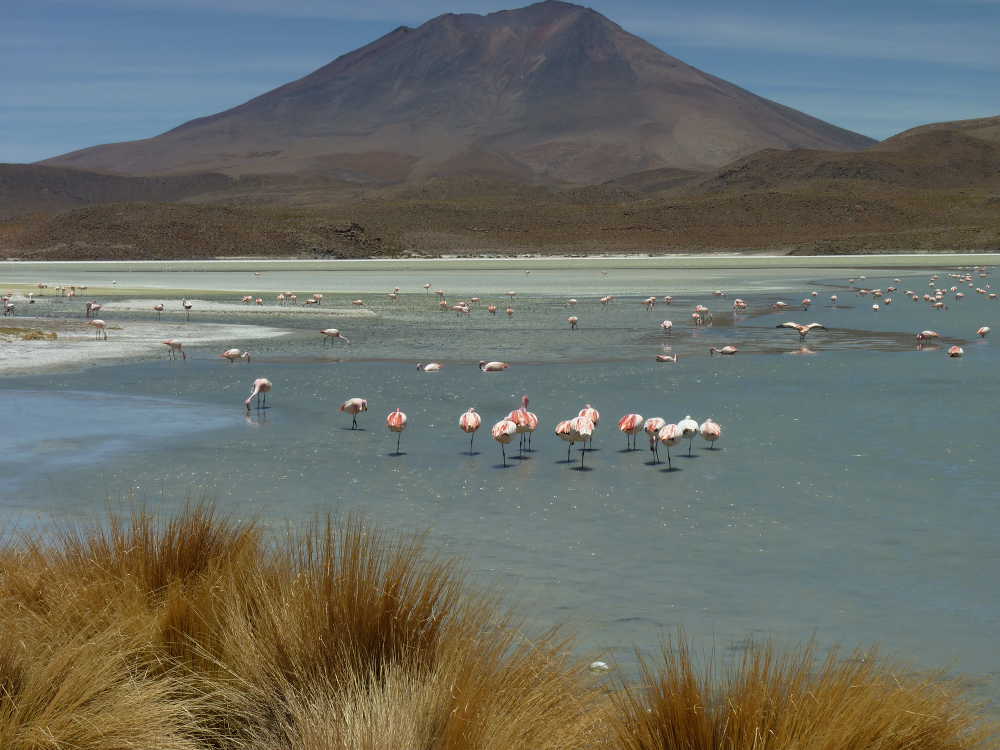 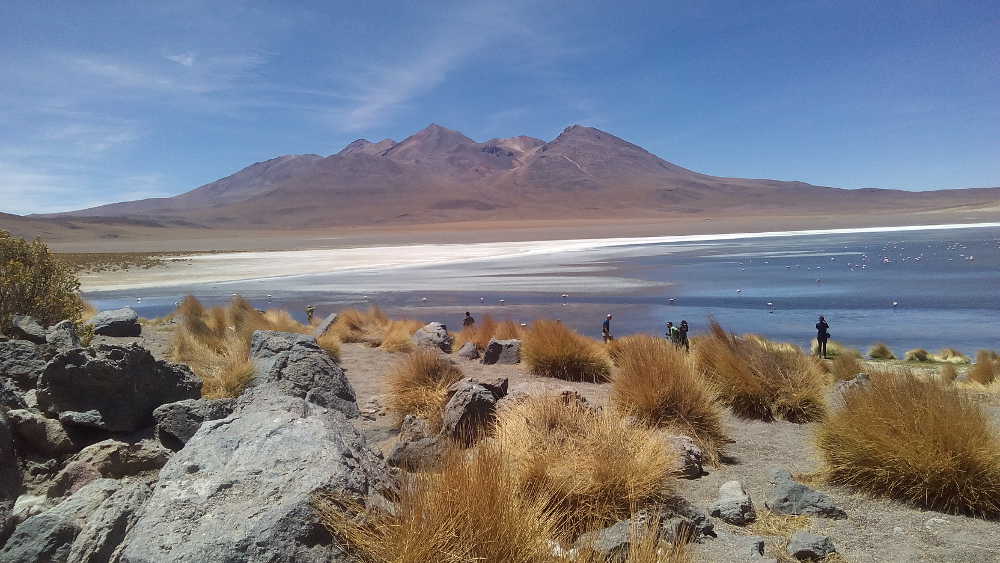 The tree of stone is one of many rocks eroded by the sand storms that are a regular part of the weather pattern in that area. 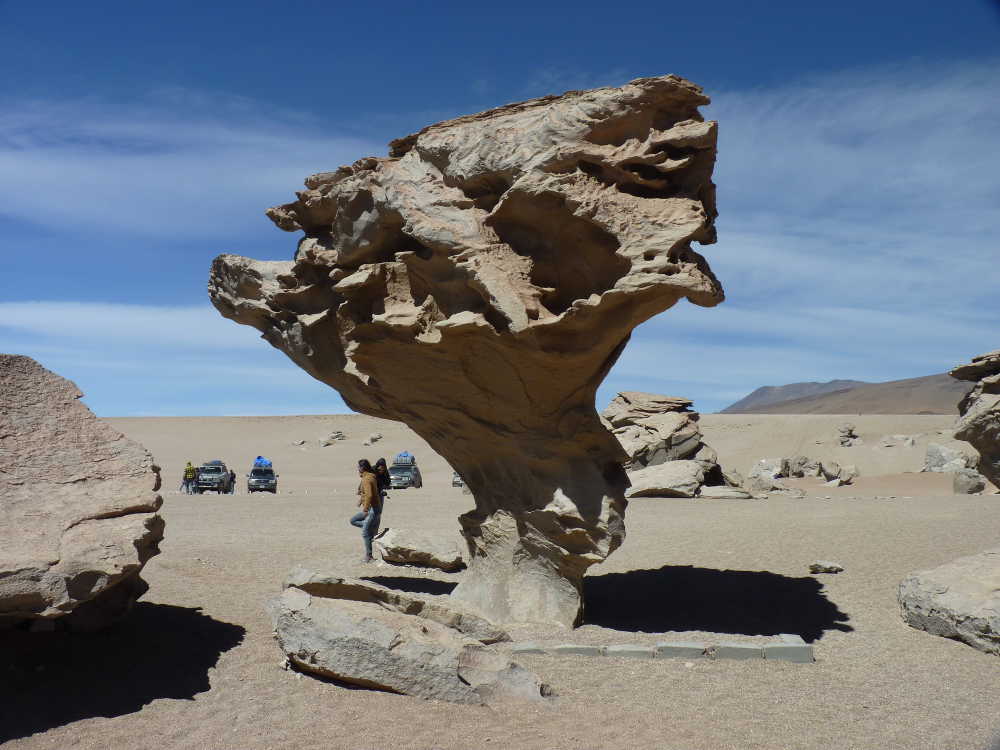 The tree of stone

Laguna Colorada 4278m – a lake coloured red by the algae that live in it. 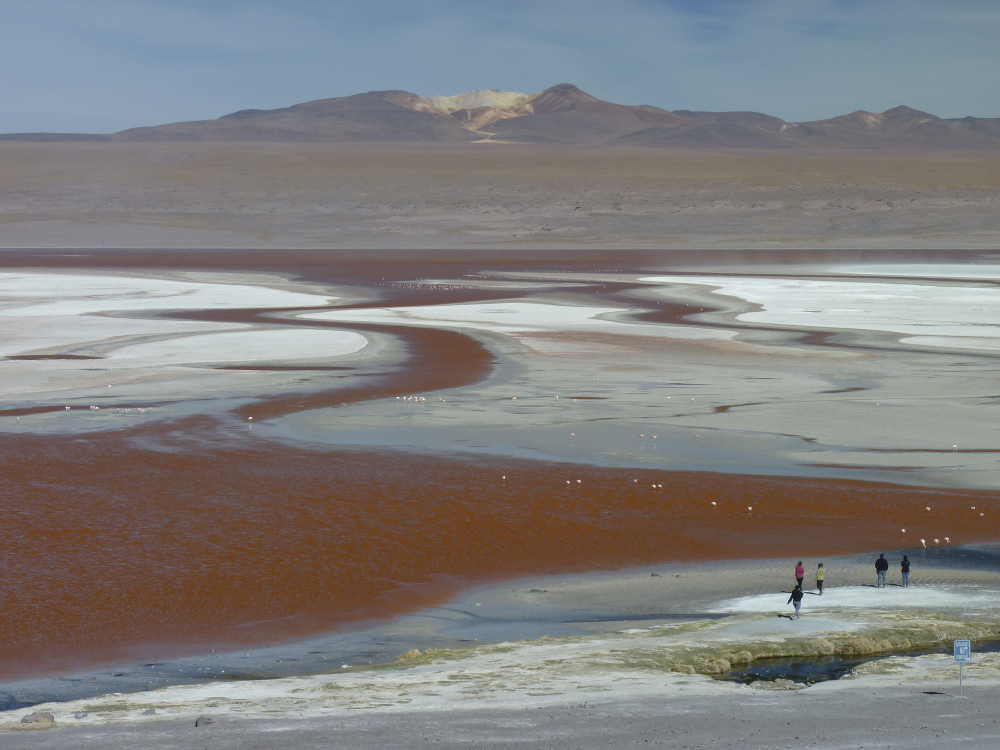 Laguna Verde, located at 4400m above sea level, is coloured green by Arsenic, Lead, Copper and other heavy metals. Next to it is Laguna Blanca, a white coloured lake filled with borax. Behind it is Volcano Licanbur at 5960m.

On the way back we visited some hot springs – below is the lake beside them. 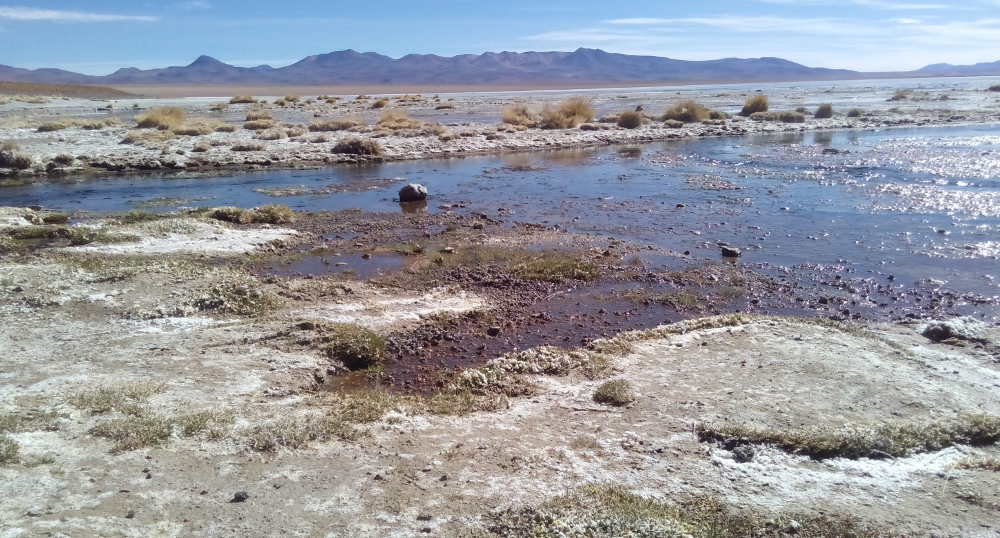 Many of the mountains, especially in the national park (Reserva Nacional de Fauna Andina Eduardo Avaroa) contain different minerals and are quite colourful as a result. The photo was taken in the middle of the day and doesn’t really do them justice.

Below is a picture of what I think is llareta – a slow growing plant that can reach up to 3000 years old. 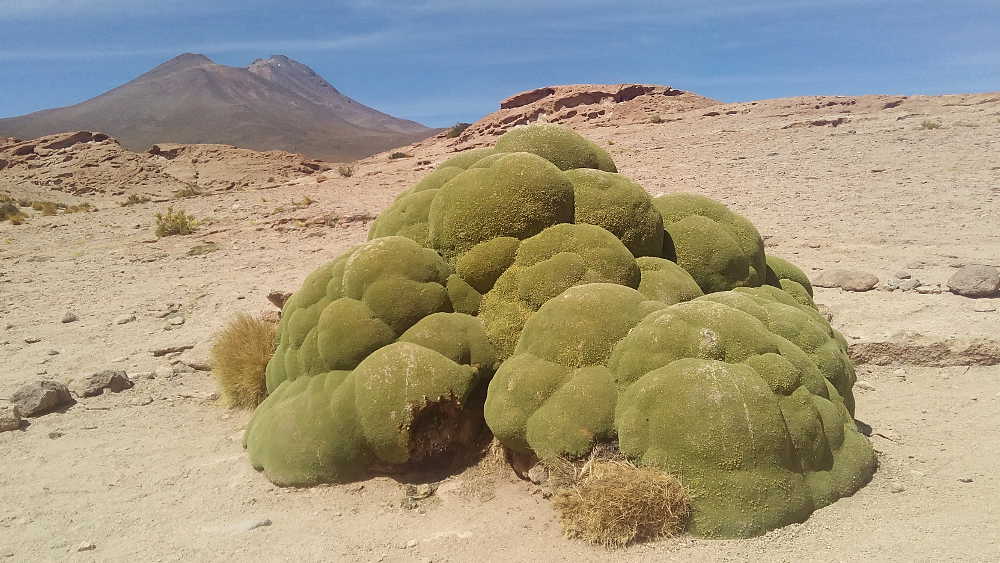