November 15th
We left Tilcara feeling better and rested but the stomach problem had not been resolved. We decided we would have to visit the pharmacy next day (Monday) to try and get some drugs. 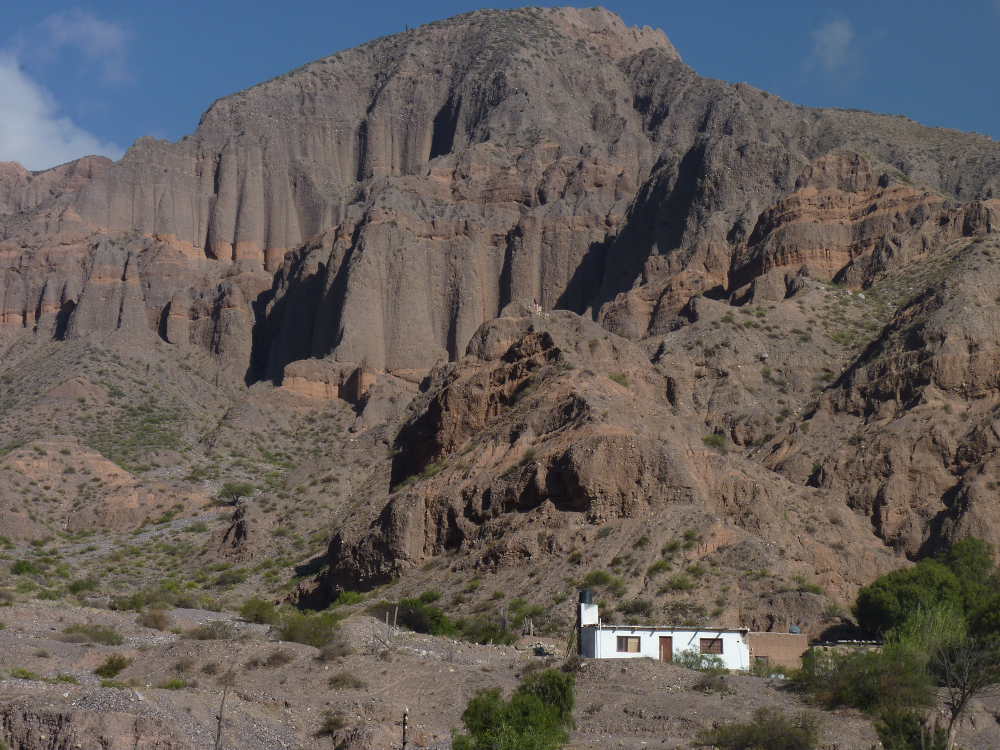 Rocks opposite our campsite

The outskirts of Tilcara

En route that day we met a Canadian, who had actually checked himself into hospital for similar reasons and he recommended a non-specific anti-biotic that should resolve the problem. The exchange of information between cyclists is always useful. This cyclist wanted to get to Santiago quickly using the bus – we were able to tell him about prices, which lead him to change his plans and hitch hike via Paso Jama.
The route to Humahuaca was about 40 km of well-graded slow uphill. We were on our way to the campsite, when Rob spotted a familiar figure at the bus station. Patricia and Marcelo had decided to come up to Humahuaca before heading back towards Chile via Passo Jama. Apparently they had books and videos they were wanted to try and sell in the main square the next day. We exchanged greetings, they found out for us where the pharmacy was (and it was open) and then we went our separate ways.

The following day we made our way to Tres Cruces. The route wasn’t especially long (50 km) but as promised it was steep in places. By the end of the day I really felt tired. We asked at the local shop about camping and the woman pointed to the area around the centre of the village. This was a large space largely used as a lorry park. We had heard from one cyclist he had camped next to the church, which was also in this same area. Unfortunately the whole area was exposed to the gale force winds that were blowing. Camping in the pampas in this area was out of the question – it offered no protection from the wind. Rob identified and got permission to camp on a piece of grass in the village previously used for animals. Eventually we ended up sneaking into an abandoned house, out of the wind it felt quite warm and cosy. Tres Cruces is used as a sort of customs frontier for lorries, hence the lorry park; perhaps due to the lack of space at the real border between Argentina and Bolivia. The next morning as we left our house the drivers were queuing up outside the customs office waiting for it to open.

Eating breakfast in the lorry park at Tres Cruces

Leaving Tres Cruces there was a little more ascent. At the top we passed a marker for 3780m above sea level. From then on we bumped along a vast plain. With gravity on our side we got to Abra Pampa (literally ‘open pampa’) in a very quick time for a second breakfast of empanadas. In an effort to beat the wind – it always strengthened in the afternoons – we then carried on along this arid flat plain. Although it seemed to us really inhospitable there were a number of small settlements on the way and animals grazing on the sparse grass.

We had lunch in a bus stop in Puesto del Marques and then struggled on against the wind to Pumahuasi. Arriving tired and in need of sugar our search for snacks was largely in vain. Often in the small Argentinian villages it is only possible to identify shops by faded and rusting Coca Cola signs outside. The doors and windows to the ‘shops’ themselves are often closed up to keep the dust and heat out. In some cases they are locked and you are expected to knock to gain entry. This, of course, is known by the locals but is difficult if you are a stranger in town and only have a basic knowledge of Spanish. Added to the problem is the limited stock held by these ‘kiosks’ as they are called and the fact that they seem only to get one delivery a week. At any rate Rob was somewhat irritated at not being able to source a cold coke.
We asked the police about camping possibilities and they said we could go anywhere so we found a green spot on the edge of the village and settled there for the night.
The following day (18th.) we got to the border town of La Quiaca fairly quickly – the wind hadn’t got up yet. It was a largish town but seemed fairly run-down, especially when, after a 10 minute border crossing, we were in its Bolivian twin of Villazon. The town was busy and vibrant. The main road leading from the border crossing to the centre of town was alive with currency exchanges and shops selling souvenirs. In the central plaza there was a market with lots of people milling around. The cash machine worked without problem – not always the case in Argentina. We eventually identified the train station and found out when our train would leave for Uyuni. Then we found a hotel for the night. It turned out they also did a fixed price lunch – about 2 Euros for 4 courses of very tasty food!! The next afternoon (19th.) at 15.30 the Wara Wara Express train left for Uyuni. 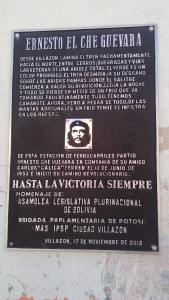 We were in good company – Che Guevara had also taken a train from there.

2 thoughts on “To the Bolivian border”