Heading North Despite still feeling delicate we headed off next day and managed 40 kms including some height gain to the town of Vulcan. Just before we reached the town borders we met fellow cyclists Marcelo and Patricia (http://ciclistaviajero.com). They are Argentinians from the east of the country, who spoke just enough English for us to communicate. They were very slowly making their way to Ecuador visiting various friends en route. Looking for the tourist information we came across a large shed, being used by local indigenous people to make woollen products from spinning the wool to the finished product. M & P said this was unusual and that much of the knitwear on sale in tourist towns is from Guatemala or Peru. It is a lot brighter than the local products. They were finishing for the day in Vulcan too and we found ourselves camping together at the local sports stadium. 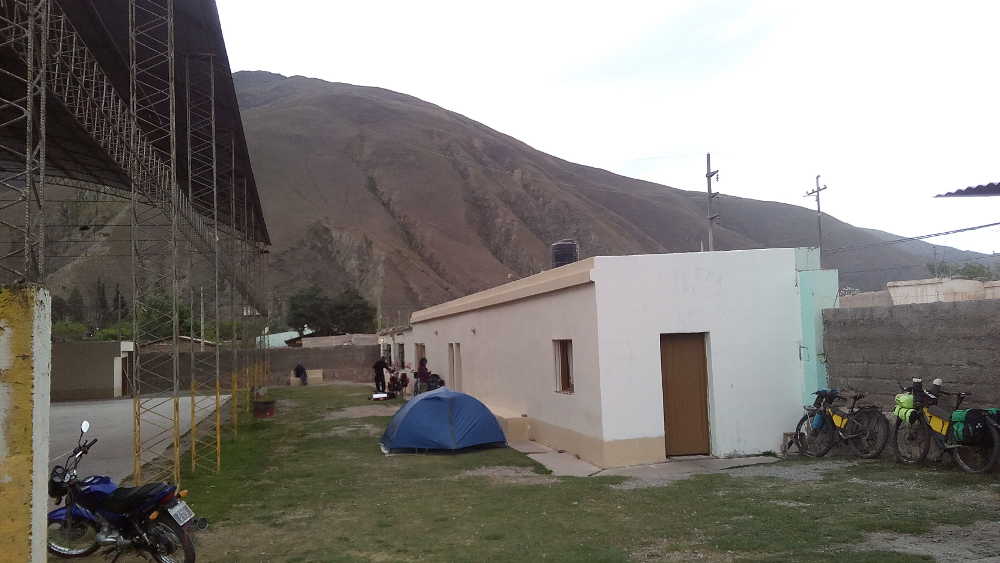 The campsite at the sports center in Vulcan 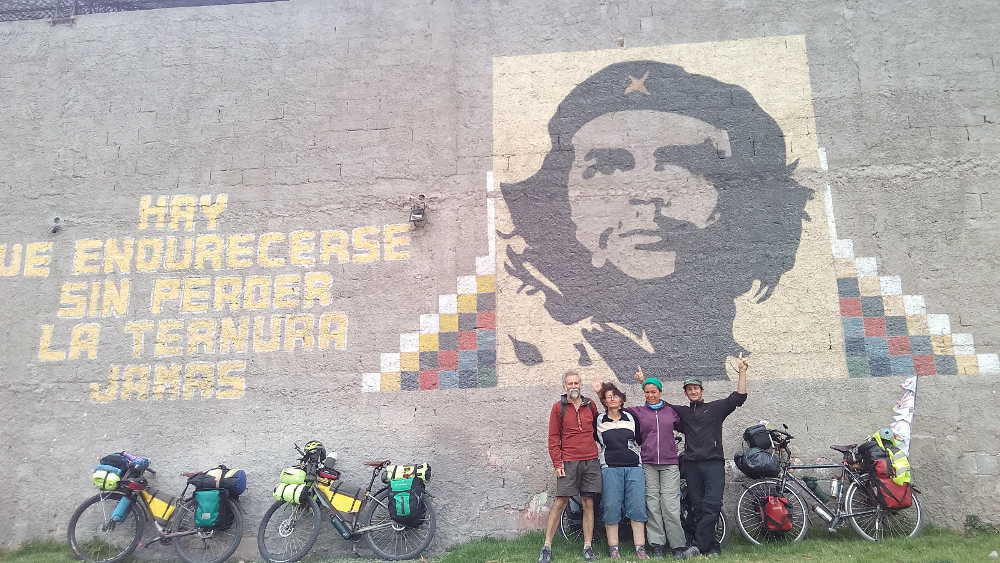 Posing under a Che Guevara mural outside the sports center

One thing I have found very impressive in the area of Argentina we have been travelling in is the presence of a plaza and sports ground in most small towns we have visited. The plaza is a tree covered area for people to meet and socialize in the shade or for us to eat our lunch in. The sports stadium are seemingly used for social as well as school and sporting events. While we were having breakfast and packing up in the morning in Vulcan we witnessed a basketball lesson and another starting just as we were leaving. The previous evening a football match was played from about 8 – 10pm. The sports stadium are also a place where visitors to the town can camp using the toilet/changing facilities for a small fee or sometimes for nothing. 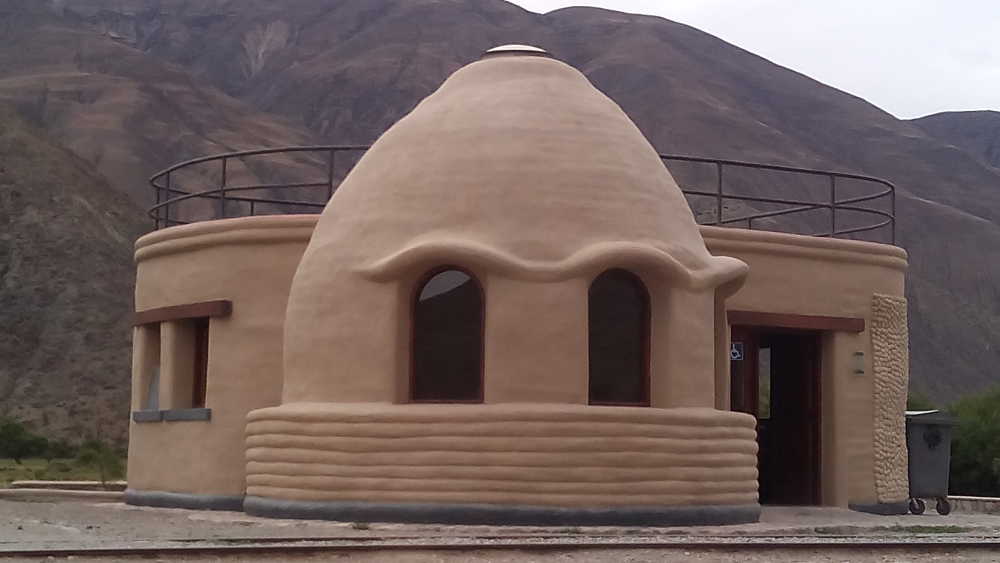 Grand Designs – Adobe tourist office in the town of Tumbaya 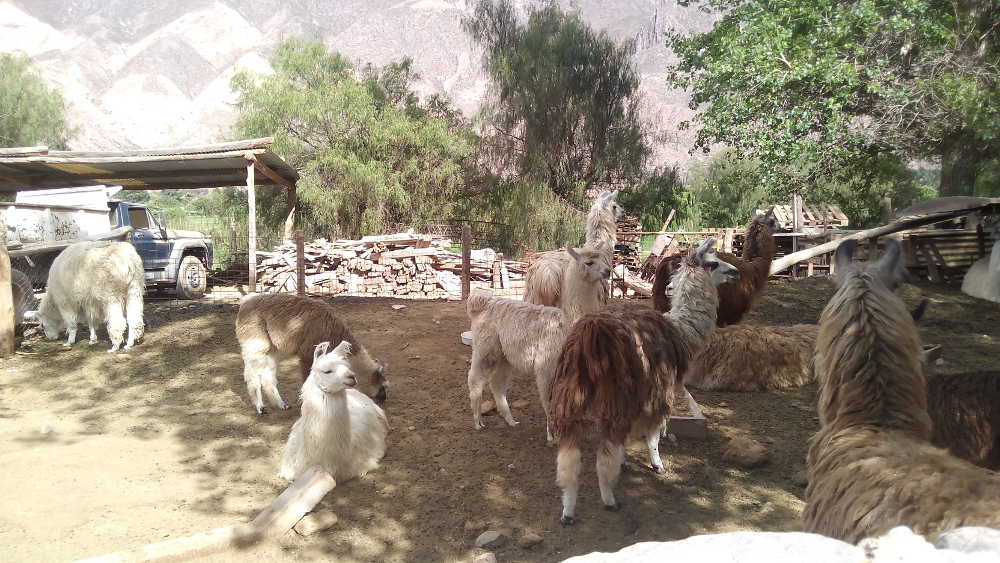 Llamas posing for their picture in a field

The next day, despite headwinds and feeling unwell, we struggled on for another 40 km to the town of Tilcara. What a difference 40km can make. Vulcan was located on one side of ruta 9 with a lime burning plant on the other side. With the wind blowing the dust and smoke from the plant landed onto the town. There was also a mine nearby. The town itself was a sorry looking run down place. Tilcara, on the other hand, is a bustling tourist town in the Quebrada of Humahuaca, which is recognized by UNESCO as a World Heritage Site. There are some amazingly coloured rock formations there and also archaeological ruins to visit as well as a number of museums. Just before entering the town we met a Polish cyclist, who told us that the road ahead was quite steep. It confirmed my decision to take another day off. My stomach still wasn’t in good order and we were both getting weak from not eating properly. We ended up taking two days off – one for sleeping and washing clothes, on the second day we visited the Pukara of Tilcara – the archaeological ruins with an adjacent cactus garden.

Part of the Quebrada of Humahuacha 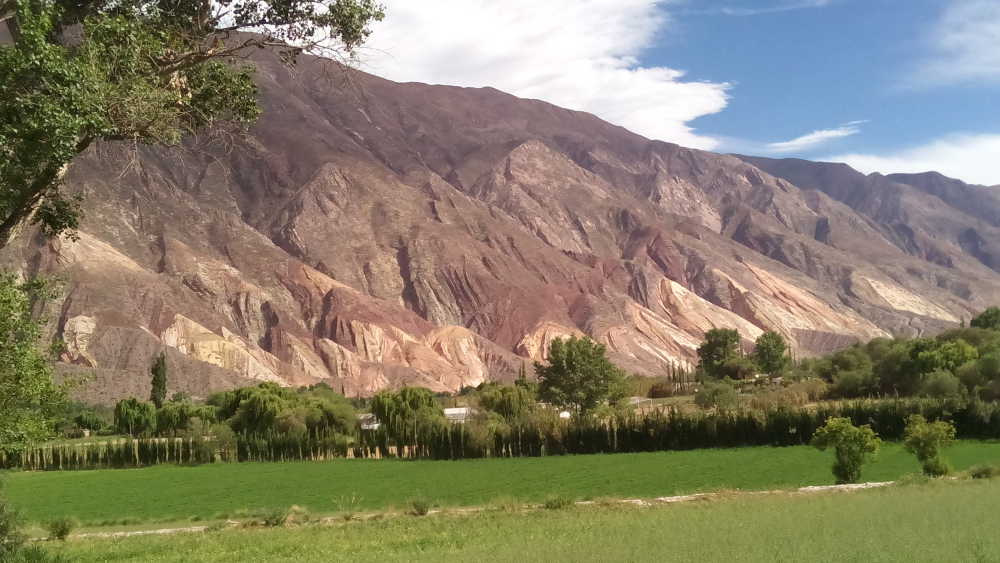 Part of the Quebrada of Humahuacha